The Russian Meteor and Global Warming

I get a lot of email from readers of this blog. Feedback, comments, critique and pointers are always welcomed. So too are fun items like this which came yesterday, from an anonymous but clearly brilliant reader (Thanks;-).


Scientists indicate that the recent meteor strike in Russia may have been connected to global warming.

In comments sent to reporters, NCAR Distinguished Senior Scientist and Nobel Prize winner Kevin Trenberth stated that the 4% increase in water vapor in the atmosphere can lead to up to a 10% increase in precipitation, and probably even more if it all converges on one spot. "If this is not massive precipitation, then I don't know what is" said Trenberth. When pressed by reporters on the magnitude of the effect, Trenberth was reluctant to give an answer, noting only that it undoubtedly made the impact worse.

NCAR Senior Scientist Gerald Meehl added that the strike was like throwing a rock into a pond "on steroids." Sales and illicit use of steroids were reported to have surged following Meehl's remark.

Trenberth and Meehl's comments were quickly reported by blogger Joe Romm of "Climate Progress", who headlined his piece "Bombshell on Russian Meteor". The headline prompted Russian and U.S. forces to go to a higher state of military alert.

Jeff Masters of the Weather Underground provided an extensive summary of the event in a blog post. Masters emphasized the higher energy content of the atmosphere connected to global warming as a likely cause of this extreme event. While acknowledging that a much larger meteor strike had occurred over 100 years earlier, Masters stated "this recent occurrence shows a clear upward trend since the middle of the last century". He added that the fact that this upward trend coincides with the global warming trend - and particularly that it occurs at the end of the record - provides clear evidence of the role of human-caused climate change. 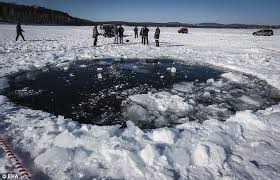 At a hastily called conference for reporters, Susan Hassol and colleagues at Climate Communication also emphasized the importance of climate warming, noting the possibility of species extinction as a result. This appears to be confirmed by statements from those living in the area near the meteor impact, who report that fish in the lake where the meteor impacted were "well poached". The consequences are not entirely negative - local residents have come together for a previously unplanned "fish fry" dinner.

Providing an alternative viewpoint, Roger Pielke, Jr. of the University of Colorado stated that the recent IPCC Special Report on Extreme Events makes no connection between human-induced climate change and meteor strikes. He also emphasized that there was no existing peer-reviewed literature supporting such a connection. Pielke Jr.'s statements were quickly denounced as being from a known skeptic and denier. Many noted that Pielke Jr. was not a climate scientist and therefore was totally unqualified on the subject. Qualifications of many of those denouncing Pielke, Jr. included watching the Al Gore movie "An Inconvenient Truth" at least five times and faithfully reading blogs by Joe Romm and Bill McKibben.

MIT scientist Kerry Emanuel acknowledged that Pielke, Jr. was correct on the absence of any evidence linking the meteor strike with global warming, However, Emanuel noted, "absence of evidence is not evidence of absence." There was general agreement on this point. Politicians quickly hailed this statement as eliminating any need for supporting evidence in speeches and policies pertaining to science.