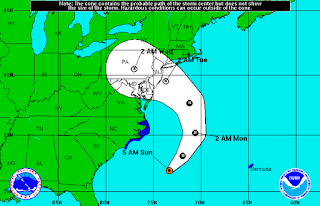 Further update 21 May 2013: The NWS Service Assessment is out (here in PDF) and it turns out that Sandy was a hurricane by NHC criteria in New Jersey as well.

Yesterday the NHC released an update to its hurricane reanalysis page which lists Sandy as a hurricane in the state of NY, but not NJ. The new update is consistent with the recent Sandy assessment, but far more black and white -- a storm is is or is not on the list as a hurricane.


The New York State Department of Financial Services and Governor Cuomo informed the insurance industry that hurricane deductibles should not be applied. The decision was based on the fact that the storm did not sustain hurricane-force winds while over New York.

The State and Governor were incorrect in that judgment, according to the NHC. What that implies is that a bunch of homeowers (technically/legally) may owe insurers a refund (if they have already been paid for losses) or are owed less in payments under their insurance policies (if they have not been paid).

In practice, there is unlikely to be a large public demand for enforcement of the hurricane deductible, and insurance companies may decide that it is not worth their effort, as most had their losses covered by reinsurers. Will any reinsurers take a closer look? I'd guess it is unlikely, and if they did we might never hear about it anyway.

As a case study in the application of "evidence-based policy" you won't find a better one than the hurricane deductible. Sometimes "evidence" matters, sometimes it does not. Sometime we care about whether it matters, sometimes we do not.
Posted by Roger Pielke, Jr. at 2/23/2013 12:41:00 PM
Email ThisBlogThis!Share to TwitterShare to FacebookShare to Pinterest
Newer Post Older Post Home