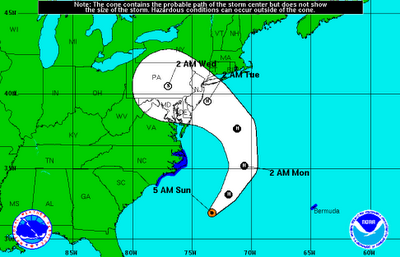 The National Hurricane Center has issued its final report on Hurricane Sandy (here in PDF). Kudos to the scientists at NHC for their fast and comprehensive work.

As I guessed, Sandy will remain categorized as a "post-tropical cyclone" upon making landfall in the US. This determination had already been established in a New Jersey executive order and widely implemented in insurance payouts. To determine otherwise would have wreaked havoc, regardless of the scientific justifications for the decision.

Interestingly however, future Sandy-like storms may be classified differently, at least in terms of how watches and warnings are issued:


[T]he NWS is exploring two proposals that, if adopted, would result in some changes to NWS products and warnings. The first proposal originates from the unique situation posed by Hurricane Sandy; it would give the NHC the option to continue issuing formal advisories on post-tropical cyclones as long as those systems pose a significant threat to life and property, and it would give the NWS the option to keep hurricane and tropical storm watches and warnings in place for those systems.

The second proposal focuses on developing an explicit warning product for storm surges.

If NWS adopts the first proposal, then it would mean that a future storm identical to Sandy in every respect would trigger the so-called "hurricane deductible" for insurance policies that are based on the issuance of a hurricane warning in the affected state. So from the perspective of insurance, Sandy was not a hurricane but a future Sandy might well be. Homeowners and insurance companies take note.

The other important news in the report is the preliminary US damage estimate, at $50 billion, which is the apples to apples number to use in comparing Sandy to the losses from our normalized loss database. It is also, coincidentally, the value I used in the figure below updating the normalized loss dataset through 2012: 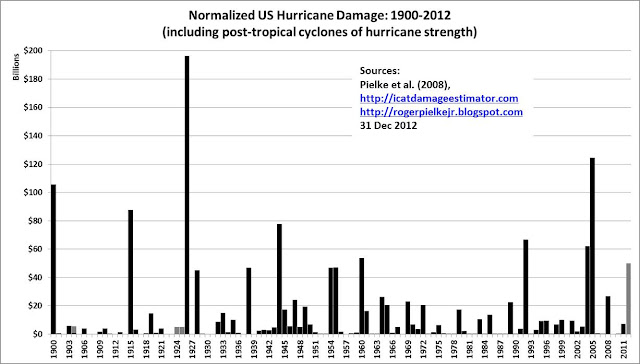