Another Economic History of the US 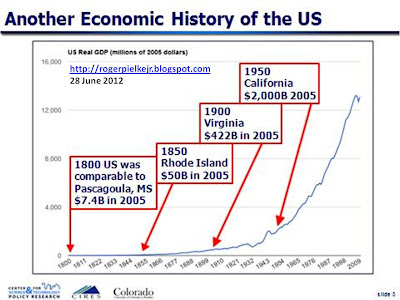 At the Breakthrough Dialogue 2012 later this week I'll be giving a response to Michael Lind, of the New American Foundation and author of the recent book, Land of Promise: An Economic History of the United States with a focus on innovation.

I liked Land of Promise, but I will offer two critiques. One is that while history provides an unbroken narrative structure to economics, it can mask changes that make one era incomparable with another. This is illustrated in the slide above from my presentation.

While I am sure that Robbie Maxwell, current mayor of Pascagoula, has some fine ideas on economic development, they probably don't carry the authority of invoking George Washington. Yet, both public officials manage(d) economies of comparable size. So I do have some issues with applying lessons from economic history to innovation-focused policies of the 21st Century.

That said, I do agree with Lind's bottom line:

The bulk of my response will focus on explaining the mythology of the so-called "linear model of innovation" (discussed here in PDF by Godin) which surrounds Vannevar Bush and post-War US science policy -- which Lind accepts far too uncritically.  The linear model, married to a convenient misreading of economics theory, has restricted our view of innovation policy for decades.

Land of Promise is a stimulating book. Despite these issues, I enjoyed it a great deal. (See also David Douglas here).
Posted by Roger Pielke, Jr. at 6/28/2012 05:41:00 AM
Email ThisBlogThis!Share to TwitterShare to FacebookShare to Pinterest
Newer Post Older Post Home