The earthquake disaster in Nepal continues to unfold, now with more than 5,000 confirmed deaths, a number that is sure to rise.  Several excellent pieces on earthquakes (such as these by Brad Plumer at Vox and Andy Revkin at the NYT) have me thinking about long-term trends. So I have quickly put together some data, with some interesting results.

1. Are we, globally, doing better with respect to earthquakes? 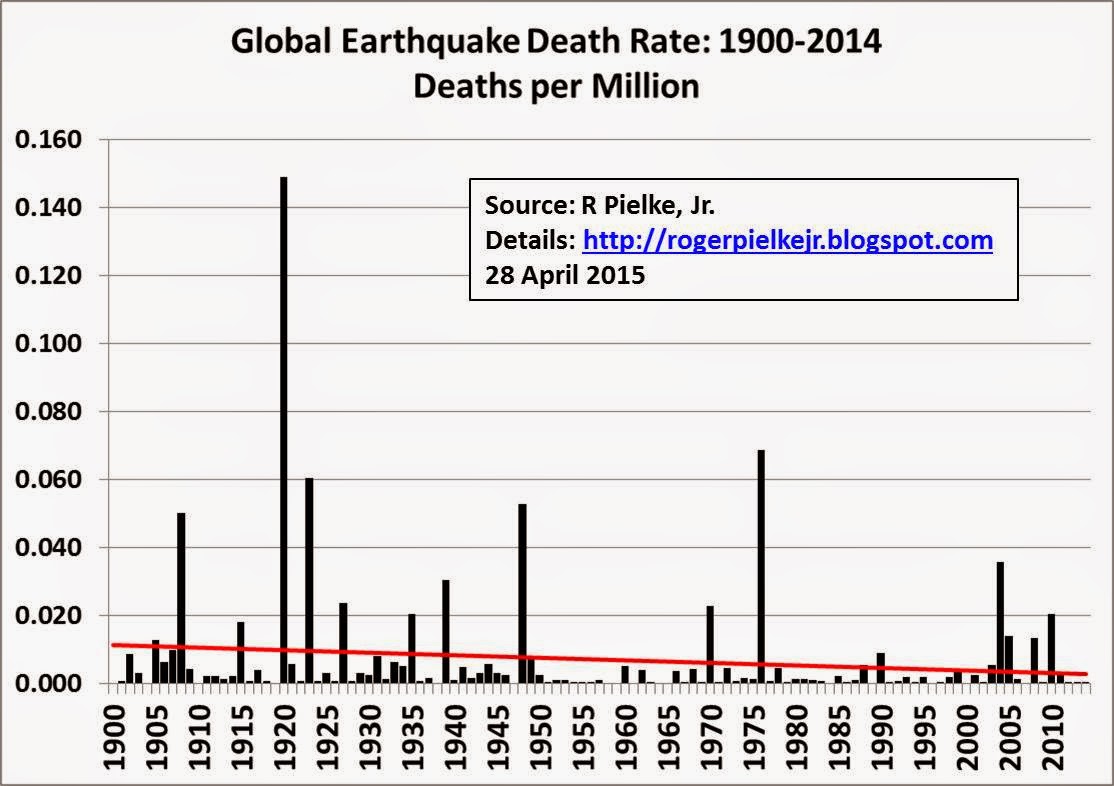 Since 1900 earthquake death rates have dropped by more than 80% (based on a linear trend, shown in red). This is extremely good news, and is suggestive that even as global population increased by a factor of more than 4, we collectively are doing much better with respect to earthquakes.

But let's zoom in to the most recent 25 years and take a closer look. 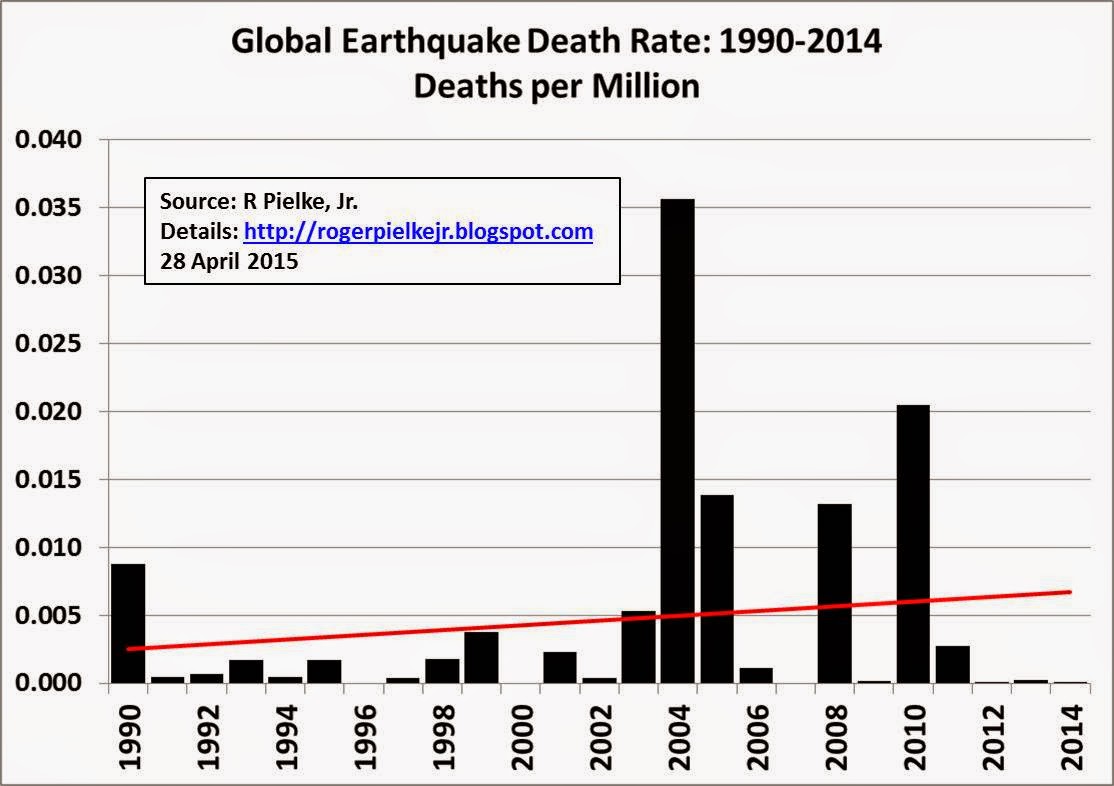 Since 1990, death rates have increased by a factor of about 3, based on a linear trend (red). What exactly  is going on here?

The answer appears to lie in a recent increase in the occurrence of large earthquakes, which I address next.

The graph above comes from my colleague here at CU-Boulder, Professor Roger Bilham, a world authority on earthquakes and central Asia in particular (Here is Bilham on the Nepal quake). That figure clearly shows a big gap in the incidence of magnitude 8.4 quakes and greater from the mid-1960s through the early 2000s. The swarm of big events in the 2000s coincides with the increased death rates over the same period shown above.

The pattern also shows up at slightly lower earthquake intensities. The figure below shows that same 1980s and 1990s "lull." The result is a pattern of an increasing incidence of strong quakes since 1990 which also shows up at magnitudes 8.0 and 7.5 (from Ben-Naim et al. 2013). 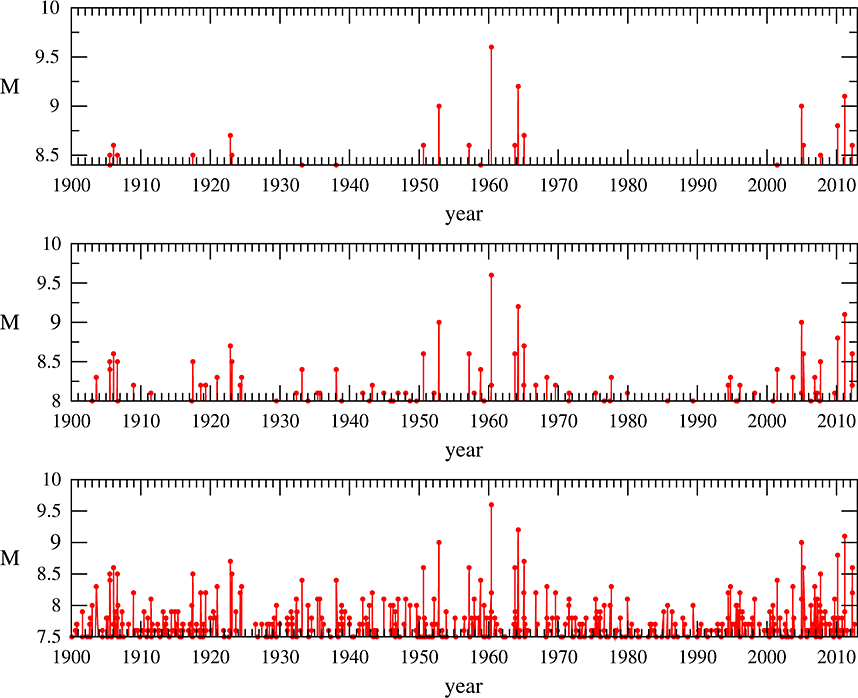 Another study concluded, "Obvious increases in the global rate of large (M ≥ 7.0) earthquakes happened after 1992, 2010, and especially during the first quarter of 2014" (here in PDF). So it seems clear that the world is in a recent period of increased earthquake activity. But does that mean that earthquakes are increasing? Or is it that we are having a run of bad luck?

The figure immediately above, showing long-term incidence back to 1900, provides a good sense of where experts presently are on these questions.  Here are conclusions from three recent papers that looked at these questions:
None of the studies listed above rule the the possibility that earthquakes are becoming more common, they simply find no evidence to support such an assertion, given the historical occurrence of events (compare Dimer de Oliveira 2012). This has to do with both statistics (no evidence of a long-term trend) but also physics (no reason to expect such an increase beyond variability).

That is the science. But from a practical perspective, large earthquakes clearly have become more common since the 1990s. This is also reflected in death rates, which overall have improved since 1900, but at least some part of that improvement is an artifact of infrequent large earthquakes in the 1980s and 1990s.

The world is doing better overall with respect to earthquakes. But some of that improvement is based on some good fortune of the 1980s and 1990s. For whatever reason -- and the current consensus is just a random uptick in a variable geophysical process - strong earthquakes have become more common over the recent decade than they were in the two decades before that.

The recent devastation should provide a reminder that we still have a lot of work to do to reduce vulnerability to earthquakes. We can't control where, where or how strong, but we can exert a huge influence on the death and destruction that results.
Posted by Roger Pielke, Jr. at 4/28/2015 12:35:00 PM
Email ThisBlogThis!Share to TwitterShare to FacebookShare to Pinterest
Newer Post Older Post Home