Focus of Attention in 10 Years of Charlie Hebdo Covers 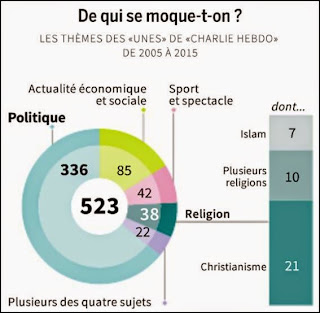 The graph above and accompanying analysis comes from  Jean-François Mignot and Céline Goffette writing the Le Monde last February.  The graph shows a content analysis of more than 10 years of Charlie Hebdo covers from 2005 to 2015. Of 523 covers, religion was the subject of 38, and of those 38, Islam was the subject of just 7.

Charlie Hebdo is in the news this week because its staff has been given Toni and James C. Goodale Freedom of Expression Courage Award by the PEN American Center, which supports free expression. The award prompted a backlash by some PEN members and others, who think that the award is inappropriate.

Whatever your views on free expression, Charlie Hebdo or the PEN Award, the data shown above are an important part of understanding what Charlie Hebdo does - they are not a magazine obsessed by (or even focused on) religion or Islam.

On the PEN controversy, I think that The Economist gets it just about right:


Unfettered free speech is good for humanity. Charlie Hebdo was firebombed, and its journalists were threatened and attacked for what they wrote—yet they persisted. That they persisted in drawing crass, juvenile cartoons is beside the point. Defending free speech means defending speech you don’t like; otherwise it’s just partisanship, not principle.