Thoughts on the New Science Advisory Structure of the European Commission 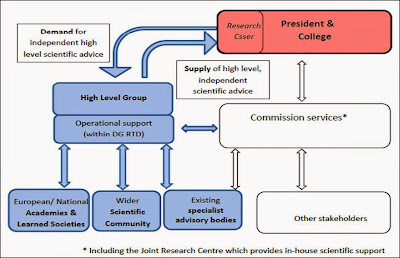 Update 15 May: Science | Business has an interesting interview with Robert-Jan Smits, Director-General for Research and Innovation, on the new advisory mechanism.He explains that the new mechanism was in part to placate the fussy Brits, still smarting from the dismissal of Anne Glover as EC CSA. He also provides some more hints on how the structure might work.

Today, the European Commission released its new plans for science advice under Jean-Claude Juncker, the EC President. The new structure comes after Juncker terminated the office of the Chief Scientific Advisor, led by Anne Glover, which was put in place by his predecessor, Juan Manuel Barosso. The new structure is shown visually in the figure at the top of this post.

While there are many details of the plan still to be announced (here is the EC press release with a link to a presentation given earlier today), here are three quick reactions.

1. The 7-person super committee will likely be problematic

My first reaction is that this supra-committee -- called a "High Level Group of eminent scientists" and shown in a blue bubble above -- is a recipe for future problems.  This is for several reasons.

One is just math. The EU has 28 member states. You can do the political math. Another problem is one that dogs the EC, democracy. Who will the "eminent scientists" actually represent? They will not, as explained today, work for the EC. It is unlikely too that they will work for member states (such as a chief scientific advisor or EU or national government employee), as these individuals work for member governments with interests that may or may not coincide with those of the EU. That leaves industry, NGOs and academics. Appointing members from industry or NGOs seems impractical, leaving academics.

If this is correct, then the "eminent scientists" will probably look a bit like the group that Junker met with today, which included Nobel and other grand prize winners: Sir Paul Nurse, Jules Hoffmann, Serge Haroche, László Lovász, Jean Tirole and Edvard Ingjald Moser. I love Nobel Prize winners as much as anyone, but until they have a Nobel Prize in science policy, it is safe to say that this group probably does not have great knowledge of science advisory processes nor of the byzantine politics of the European Union, although some have relevant experience. A group of the "great and the good" is politically defensible, but may be practically problematic.

This, I question whether the "High Level" group is either necessary or desirable.

As I have written before, the EC already has a significant expert body within its ranks that stands ready to enhance science advice to the commission. There are undoubtedly considerable internal politics (Gambling? I am shocked, shocked!) within the EC between its Directorate for Research and Innovation and the Joint Research Centre, that I am utterly and blissfully unaware of.  That said, it is important to recognize that the support of science (which we might call "policy for science") is a different sort of beast that support of policy (which we might call "science for policy").

In fact, putting the same body in change of both functions could create some unhealthy potential for conflicts across roles, for the simple reason that DG RTD is in the business of advocating for science budgets. If advocating for the use of certain science is added to its portfolio, then these different missions could come into conflict. It is a little bit like putting an agricultural ministry in charge of advocating for farmers and for for healthy diets. You'd like to think that these two interests always go hand in hand, but experience shows that they sometimes don't. Experience shows that separating institutions that support science and those that support policy helps to avoid unnecessary conflicts.

In my opinion, the JRC is much better placed to negotiate the connections between the "demand" for science advice and the "supply" of science advice. Along those lines, see this paper by Dan Sarewitz and I a few years back which proposed a model for reconciling the supply of and demand for science (here in PDF). It is a notable positive that the EC proposal adopts the framing of "supply and demand" as this will highlight the significance of the interface between the two, and the need for expertise at that interface.

3. Roles and responsibilities have yet to be described

This is a point made by Corporate Observatory Europe (one of the groups which campaigned to have the EC CSA office terminated), and specifically that "independence" and "transparency" have yet to be defined. I agree. Much better than an "independence" framing might be a "conflict of interest" framing. This is another reason why coordinating the reconciliation of supply of and demand for science might be better done from inside the EC rather than by a body of supposedly heroic, independent super humans.

More broadly, the role of such a "science advisory mechanism" needs to be made clear. is is a science arbiter? An honest broker? Or what? How is demand to be identified? What products are to be produced? Other such questions might be raised as well.

To be fair, there is time to provide answers to these questions. But they should be answered. One of the problems with the EC CSA office is that its creation was seen by some as "mission accomplished" and it started with few resources or mechanisms (see the discussion in Wilsdon and Doubleday, here in PDF). It would be very easy for the EC to move on from today's announcement, to let the issue move into the background, only to reemerge sometime down the road in problematic fashion  as occurred with the CSA.

For anyone interested in improving connections of expertise and decision making, the EC stands at a significant fork in the road. Which route it takes will be significant. We should all keep paying attention.
Posted by Roger Pielke, Jr. at 5/13/2015 10:10:00 AM
Email ThisBlogThis!Share to TwitterShare to FacebookShare to Pinterest
Newer Post Older Post Home