Here is a novel award given by the UK group Sense About Science in partnership with Nature: 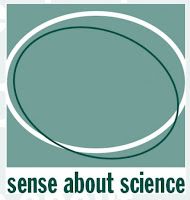 The John Maddox Prize will reward an individual who has promoted sound science and evidence on a matter of public interest. Its emphasis is on those who have faced difficulty or hostility in doing so.

Nominations of people at an early stage in their careers are particularly welcomed.

The prize is open to nominations for any kind of public activity, including all forms of writing, speaking and public engagement, in any of the following areas:

The prize: £2000. An announcement of the winner will be published in Nature.

Sir John Maddox, whose name this prize commemorates, was a passionate and tireless champion and defender of science, engaging with difficult debates and inspiring others to do the same. As a writer and editor, he changed attitudes and perceptions, and strove for better understanding and appreciation of science throughout his long working life.

Know anyone deserving? Nominations due 20 August here. I already have a few people in mind to nominate, but I'd welcome your suggestions -- Feel free to discuss and debate candidates in the comments.
Posted by Roger Pielke, Jr. at 6/25/2012 07:01:00 AM
Email ThisBlogThis!Share to TwitterShare to FacebookShare to Pinterest
Newer Post Older Post Home