An Interview with an Activist Journalist 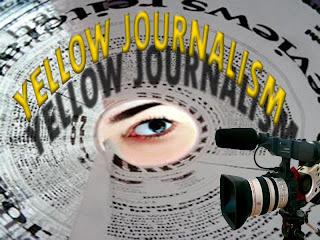 The Columbia Journalism Review has an informative and eye-opening interview with Justin Gillis, who covers climate change for the New York Times. I have been fairly critical of Gillis' reporting on this blog on several occasions (even awarding one of his stories the worst climate story ever in the NYT for its uncritical reporting of the NOAA billion-dollar disaster nonsense). It is of course perfectly understandable that Gillis hasn't much appreciated my critiques, but it goes with being a reporter at one of the most prominent media outlets in the world. He won't like this post either.

In the CJR interview, Gillis is remarkably candid and in doing so he provides a clear sense of where he is coming from -- the perspective that he brings is not plain vanilla journalism that you might expect from the paper of record, but journalism colored with a heavy tinge of yellow.

Gillis explains to CJR how he came to work on the climate beat while on a fellowship at MIT and Harvard:


I started taking classes and the more I learned, the more I thought to myself, “This is the biggest problem we have—bigger than global poverty. Why am I not working on it?” From there, the question was, how do I get myself into a position to work on the problem?

The notion of "working on the problem" is a fine ambition, but is clearly much more aligned with advocacy for action rather than reporting a beat. Rather than informing his readers Gillis is in the business of making an argument.

On the East Anglia emails that were released in 2009 Gillis makes a strong statement:


One was forced to read the e-mails and ask, “Do they suggest any sort of scientific misconduct?” As we studied them, it became clear to me that they didn’t, so we asked ourselves, “How do we respond in this situation when the evidence is all pointing in the same direction?”

Good guys, bad guys. All the evidence. One direction. That explains the lack of nuance in the NYT reporting of climate change science and politics.

How does he handle the perspectives of so-called "skeptics" in his reporting (emphasis added)?


Even when, in the context of a 4,000-word story, I quote skeptics for three or four paragraphs and then drop them and move on, I can reliably count on some sort of attack from somebody saying I shouldn’t have done that. I think these people are just being a little—what’s the right word—ditzy.

If one is covering evolution these days, one can afford to ignore the anti-evolutionists most of the time because they are completely scientifically discredited and, more importantly, sort of spent as a social force. Unfortunately, we just are not at that point with climate science.

However discredited the scientific case questioning climate science may be, it is influencing half the Congress and a substantial fraction of the population. So this is almost like if you’d been in Tennessee in 1925 getting ready to cover the Scopes Monkey Trial. The anti-evolutionists were already scientifically discredited by then, but as a journalist, you could not have avoided quoting them in order to put the whole thing in its political context. I’m sad to say that in 2012, that’s still where we are with climate science.

I'm not surprised to hear such a dismissive perspective from Gillis on points of view that he disagrees with.

Last year, when we still were engaging by email I sent him a link to this post on food prices and their impact. That post was based on a paper from a scholar at the International Food Policy Research Institute that discussed the many complexities of assessing "food insecurity."  The paper and other analyses raised a host of questions ignored in Gillis' article on food prices, which emphasized climate change.  I concluded in that post with:


One of the frustrations of practicing policy analysis is that you are reminded on a daily basis that we are never as smart as we think we are, and things that we thought we knew for sure, sometimes just ain't so.

Gillis responded to my post by outright dismissing the research that I had discussed, suggesting that the experts that he had chosen to report on were the ones who were correct (actually, several of the experts that he cited said the opposite of what he reported, but I digress).

I responded to Gillis by encouraging him to consider that there are complexities that he might not have considered:


It is not implausible that there are other causes for the riots, e.g., see Bahrain.  It is also not implausible that people have enough food to eat but don't like high prices anyway ... the point in his paper [discussed on my blog] is not that prices did not get higher, it is that food insecurity did not grow as conventional wisdom suggests.

I try not to dismiss detailed and rigorous quantitative policy analyses out of hand because they do not conform to my preconceptions ;-)

After another curt and dismissive email from Gillis (he has not granted me permission to publish them, unfortunately), I responded a final time:


I admire the speed and certainty that you bring to deciding what academic perspectives have merit and which do not, I can only surmise where my own 20 years of work falls out ;-)

Where is Gillis going next?  Why, extreme events of course:

One thing I’m seeing—and I see it in our own paper as well as many other news outlets—is that people are covering the crazy weather we’re having and, more often than not, dodging the subject of whether there’s any relationship to climate change. TV weathermen are dodging that subject. Print reporters are dodging the subject. And it’s not so easy to cover because science does not have particularly good answers for us. The concept that I wrote about last week—that we’re in the middle of a sort of weather “weirding”—isn’t really a scientific concept for which you can build a weird index and figure out where we are on that index, but there are some things that scientists can say about weather extremes. Some of the extremes are very consistent with what is expected and what has long been predicted, and we’re seeing very clear trends in certain extremes like heat waves and heavy precipitation events. Reporters are not going to be able to be definitive, in real time, about whether this particular event was or wasn’t connected to climate change, but it’s a bit of a scandal that there’s not enough connecting the dots for people.

All this dodging of extremes -- It is too bad that the IPCC hasn't taken up the issue of extreme events, especially high impact events like floods, tornadoes and hurricanes around the world. If they did, I'm sure that the NYT would be all over it. ;-)

Both advocacy and journalism are fundamental to a healthy democracy, but when they are mixed together, especially on the news pages of the NYT, neither is served particularly well. Please count me among those who prefers to get news from plain vanilla journalism, not the yellow kind.
Posted by Roger Pielke, Jr. at 4/03/2012 05:36:00 PM
Email ThisBlogThis!Share to TwitterShare to FacebookShare to Pinterest
Newer Post Older Post Home