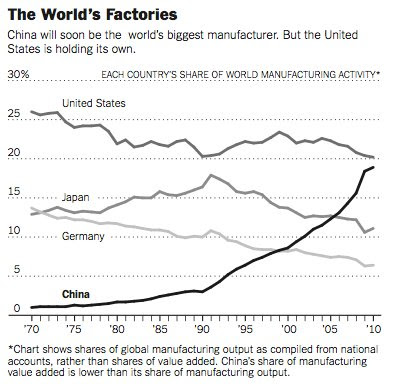 UPDATE: At ITIF Rob Atkinson has a go at the Porter article here.  Frequent readers will know that I side with Porter on the big picture here, but as Atkinson says, correctly, all is not black or white in this debate.  Have a look.

Yesterday's New York Times had an absolutely brilliant article by Eduardo Porter on manufacturing, the economy and innovation. The figure above accompanies the article, which deserves to be read in full, but here is an excerpt:


Things have not looked this promising for manufacturing jobs in a long while. Rising costs in China — where the government is letting the currency gain against the dollar and wages are rising at a double-digit pace — are making it more attractive for American companies to produce at home. Expensive oil adds to the cost by pushing up the price of freight.

Yet a revolution in manufacturing employment seems far-fetched. Most of the factory jobs lost over the last three decades in this country are gone for good. In truth, they are not even very good jobs.

As much as the administration needs a jobs strategy, one narrowly focused on manufacturing is unlikely to deliver.

Much of the anxiety about factory jobs is based on the misconception that job losses have been due to a sclerotic manufacturing sector, unable to compete against cheap imports. Until the Great Recession clobbered the world economy, manufacturing production was actually holding its own. Real value added in manufacturing, the most precise measure of its contribution to the economy, has grown by more than two thirds since its heyday in 1979, when manufacturing employed almost 20 million Americans — eight million more than today.

American companies make a smaller share of the world’s stuff, of course. But what else could one expect? Thirty years ago China made very little of anything. Today its factory output is almost 20 percent of world production and about 15 percent of manufacturing value added.

What’s surprising is how little the United States lost in that time. American manufacturers contribute more than a fifth to global value added.

Manufacturers are shedding jobs around the industrial world. Germany lost more than a fifth of its factory jobs from 1991 to 2007, according to the United Nations Industrial Development Organization, about the same share as the United States. Japan — the manufacturing behemoth of the 1980s — lost a third.

This was partly because of China’s arrival on the world scene after it joined the World Trade Organization in 2001. Since then, China has gained nearly 40 million factory jobs. But something else happened too: companies across the developed world invested in labor-saving technology.

The article includes this interesting nugget about the government role in innovation in agriculture:

Remember agriculture? In the 1960s, plant scientists at the University of California, Davis, developed an oblong tomato that ripened uniformly, and its engineers developed a machine to harvest it with one pass through the fields. By the 1970s the number of workers hired for the tomato harvest in California had fallen by 90 percent.

In the book “Promise Unfulfilled,” Philip Martin, an economist at the university, says that in 1979 the worker advocacy group California Rural Legal Assistance sued the university for using public money on research that helped agribusiness at the expense of farm workers. And in 1980, Jimmy Carter’s agriculture secretary, Bob Bergland, declared that the government wouldn’t finance any more projects aimed at replacing “an adequate and willing work force with machines.” It’s hard to say that workers won this battle, however. After Mr. Bergland pulled the plug, research on agricultural mechanization came to a near-halt.

The article's take-home point is a gem:


[E]ach job in an “innovation” industry, broadly understood, creates five other local jobs, about three times the number for an average job in manufacturing. Two of them are highly paid professional positions and three are low-paid jobs as waiters or clerks.

Innovation — not manufacturing —has always propelled this country’s progress. A strategy to reward manufacturers who increase their payroll in the United States may not be as effective as one to support the firms whose creations — whether physical stuff or immaterial services — can conquer world markets and pay for the jobs of the rest of us.