What Prompted the Decline of Oil Power? 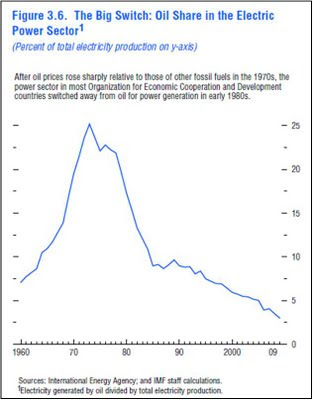 The figure above comes from the IMF World Economic Outlook released earlier this week in a chapter on "oil scarcity" (PDF).  The report explains the figure as follows:


Most OECD countries saw a big switch away from oil in electric power generation in the early 1980s. After oil prices rose sharply compared with the prices of other fossil fuels in the 1970s, the power sector switched from oil to other input (Figure 3.6): some countries went back to coal (for example, the United States); others increased their nuclear capacity (for example, France) or turned to alternative energy sources.

Over about 40 years oil lost about 90% of its role as a source of energy for electricity production (from a 25% share to a 2.5% share).  There are a few interesting points to take from this dramatic shift, some of which seem obvious but nonetheless worth highlighting.

1. Significant energy shifts happen.
2. They can take many decades.
3. Such shifts depend upon available substitutes.
4. The trend was from more expensive energy to less expensive energy, not vice versa.

There is a lot of material in the IMF report that will be worth a future discussion as well.
Posted by Roger Pielke, Jr. at 4/14/2011 07:30:00 AM
Email ThisBlogThis!Share to TwitterShare to FacebookShare to Pinterest
Newer Post Older Post Home