Analysis of The Nisbet Report -- Part I, Doomed to Fail

Matt Nisbet of American University has issued a report that includes some fascinating information and compelling analysis of a number of issues related to the US environmental community, the media and scientists as related to climate change.  I was a reviewer of the report, which means that I read an early version and provided some critical comments to Matt which he considered (or not) in the revision.

With a few posts, starting with this one, I want to provide a brief discussion of the top line empirical findings in the Nisbet report and why I think that they are important.

While horse race aficionados will continue to focus attention on the minutia of financial accounting in order to argue about who spent more on the cap and trade battle, the good guys or the bad guys, far more interesting is data gathered which documents the sheer magnitude of expenditure by the environmental community in support of a specific approach to climate policy.

The data show quite clearly, no matter how one may try to parse it, that the debate over climate change is not David versus Goliath, but rather two Goliaths slugging it out in high stakes, big money power politics.  According to data gathered by Nisbet, the leading environmental advocacy foundations spent upwards of half a billion dollars from 2008-2010, largely in support of a collective strategy expressed in the little-known but crucially important Design to Win strategy document for environmental philanthropy (here in PDF):

The Design to Win strategy is encapsulated in the following figure which helps to explain what the mainstream environmental community thinks it has been doing on the climate issue over recent years.  It also explains what you see many climate bloggers doing which often includes wringing their hands over what they believe to be a lack of education among the public, the media and the politicians. 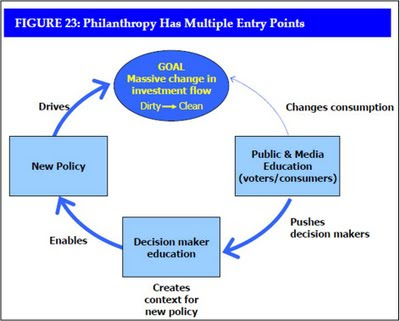 The figure shows that the theory at work here is that "education" of the public and the media is expected to "push decision makers" which "creates context for new policy" and along with "education" of decision maker "enables new policy" to drive "massive change" in investments.  This framework is one important reason why we have the climate wars, as it shows that the environmental community believes that in winning a war for public opinion lies the key to policy success.
Yes, of course there are conservative and other groups opposed to action on climate change who also have truckloads of resources at their disposal and who also think they are fighting a battle over public opinion.  But we know this, as it has been well documented and discussed for years, with many such studies cited by Nisbet in his bibliography. What Nisbet's report does is help to fill a notable gap in the study of climate policy and that is to document the efforts devoted by those in support of action. What his analysis clearly shows is that the environmental community has enormous resources at their disposal which are clearly focused on a strategy of public education.
While the underlying strategy adopted by the US environmental community may be titled "Design to Win" it is in fact "Doomed to Fail." As I document extensively in The Climate Fix, the battle for public opinion on climate change has long been over and the environmental community has won, as a majority of people consistently believe that humans affect the environment and are in support of action.  Further, the idea that public education leads to new policy is deeply flawed political science  and has been routinely debunked in the science studies literature as the so-called "deficit model." More fundamentally, it is simply contrary to history, experience and plain old common sense.
The following data from Gallup shows little change in aggregate public opinion over many years. Such data is fairly representative of public opinion polling over the past decade and longer on public views of climate science and action (see The Climate Fix for more detail).

And while public understanding, concern about and support for action have been largely stable (albeit with various ups and downs) for decades, the most notable shift has been the dramatic partisan divide that has opened up on the issue.

“Of those who identify as Republicans, about 49 percent said in the 2001 Gallup survey that they believe the effects of global warming have already begun — a number that dropped to 29 percent in 2010,” states a summary of Associate Professor Aaron McCright’s study, which appears in the Spring issue of Sociological Quarterly.

Of course, one could look at this data and conclude that environmental groups simply haven't done enough education of the public or that the forces of darkness are still in the lead, as measured by spending, so more spending on "education" is needed.  It is certainly a convenient argument to advance if you are in the business of trying to "educate" the public, especially if you are a recipient of foundation funding under the Design to Win strategy.  It is also insane to expect to continue the same behavior and to see different results.
But what if the Design to Win strategy is in fact fanning the partisan divide and as a consequence making action less likely?  What if the "education" strategy has morphed into destructive efforts to silence or discredit alternative voices in the climate debate other than those which espouse the narrow set of policy prescriptions endorsed by Design to Win?  What if the entire theory behind the idea of rectifying a deficit of public understanding is based on flawed premises?
Nisbet suggests that there are consequences:

[F]ocus and strategy are only as effective as the premises upon which they are based. As described, the Design to Win report appeared to define climate change in conventional terms, as an environmental problem that required only the mobilization of market incentives and public will. With this definition, comparatively limited funding was directed toward fostering the role of government in promoting new technology and innovation. Nor was there equivalent investment in such important human dimensions of the issue as adaptation, health, equity, justice or economic development.