The FA Work Permit: A Positive or Negative?

The Professional Football Players Observatory has issued their first Global Player Migration Report, and it has some really interesting data on the flow of footballers between associations around the world.  For instance, here is a figure showing the importation of players into the EPL in 2010: 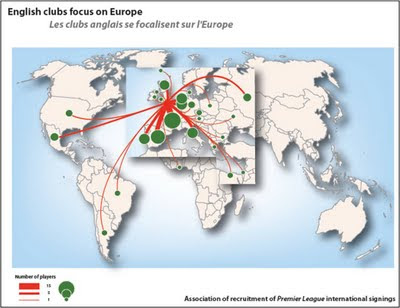 The text that accompanies the figure explains:


In 2010, Premier League clubs have imported players from 27 national associations. The geography of these imports shows the importance of spatial proximity. The majority of international signings have been carried out from national associations of EU's member states, for the most part neighbouring ones.

This situation is partially due to the ruling obliging non-EU footballers to have played 3/4 of the matches of their national A-team during the two years preceding the transfer to be eligible for a work permit. Insofar as footballers playing for local clubs have almost no chance of being selected in many of the most competitive non-European national teams, direct imports from there are often impossible.

The details on FA work permits for non-EU players can be found here. It presents a considerable obstacle to gaining entry to the EPL.  For instance, Colorado Rapids player Omar Cummings was recently denied a work permit because his national team, Jamaica, is not in the world's top 70 ranked nations (another of the work permit regulations):


The 28-year-old Jamaican traveled to Birmingham, England, in December to begin training with the English Premier League team. The Rapids' official site says Cummings' work permit was denied because he is not a member of the Premier League and his country has not been in the top 70, on average, in the FIFA World Rankings over the past two years.

The work permit raises some interesting questions about the effects of the work permit that might be addressed empirically, such as:

1. Does the work permit hurt the quality of EPL teams?

On the one hand, the performance of the EPL in the UEFA Champions League would tend to support the argument that at the top, the answer is "no."

On the other hand, the dominance of a handful of teams at the top of the league year after year suggests that the league has some problems with parity.

2. Does the work permit make the EPL more globally attractive?

I think that the answer here must be "yes."  By allowing in only those non-EU players who excel in international competitions for their national teams, the EPL guarantees that they are bringing in widely-recognized national stars who will command an audience from outside Europe.

3. Does the work permit help to aid the development of English players?

I am not sure how this might be measured, but I can come up with arguments on both sides.  My instincts say "no" and I wouldn't be surprised if the work permit actually allows room for weaker English players into the EPL than would make it in a fully open market.

Ironically enough the FA Work Permit is a government-mandated performance standard that bears some relationship to ongoing discussions on this blog about performance standards in technology, such as for light bulbs and fish hooks.  An evaluation of the effectiveness of the work permit policy will be a function of the goals that it seeks to achieve.  If the goals are to improve the quality of soccer in the EPL, enhance parity or develop the English national team, I'd hypothesize that the policy is not succeeding.  However, if the goal is to help give the EPL a competitive advantage in the international business of football (e.g., via brands, marketing, merchandising, TV rights, etc.) then it may indeed be a success.

I'd be interested in pointers to any academic or industry analyses of this issue.  Thanks!
Posted by Roger Pielke, Jr. at 4/15/2011 07:42:00 AM
Email ThisBlogThis!Share to TwitterShare to FacebookShare to Pinterest
Newer Post Older Post Home