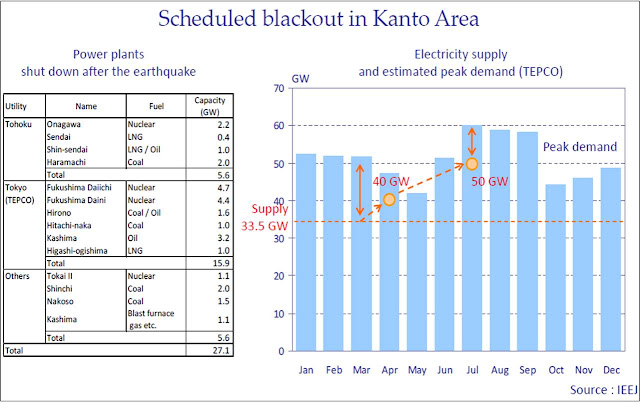 At a meeting last week I was treated to an overview of Japan's energy situation in the aftermath of the Tohuku earthquake and tsunami by Yuhji Matsuo, of the Institute of Energy Economics, Japan.  He shared the slide above, which is shared here with his permission. The table on the left shows the electricity supply knocked out by the quake. The fiigure on the right shows peak supply available (red dashed line) showing when capacity is expected to return, and needed peak supply (blue bars, based on 2010 consumption).   The figure was accompanied by this text:


‐ After the earthquake, many power plants (nuclear, LNG, coal, etc.) stopped operation and 27.1 GW generating capacity was lost.
‐ As of Mar 17th, TEPCO‘s electricity supply capacity was 33.5 GW, while estimated peak demand in March was 52GW. TEPCO and started scheduled blackouts in the eastern part Japan for the first time after the World War II.
‐ Blackouts will end in April, and start again in summer, when air cooling demand will boost electricity consumption.
‐ Great efforts have been paid in these regions (including Tokyo) to reduce electricity consumption.

I found the following to be interesting as well:

1. A total of 4 nuclear complexes felt the effects of the earthquake and the tsunami, including flooding.  Of those, 3 survived with no problems.  Obviously, a 75% success rate is not good enough, but it does indicate that reactor complexes can be designed to successfully survive such an event.

2. Far more fossil energy was knocked out by the event than nuclear energy. Another expert from Japan mentioned (somewhat wryly, I'd say) that this might mean that Japan hits its Kyoto emissions reduction targets.  Over the long term, to the extent that the restored energy is more carbon intensive than what it is replacing (which seems inevitable), Japan's carbon dioxide emissions will necessarily increase to more than the pre-earthquake levels.

The IEEJ has much more interesting information and analyses available here.  Thanks Yuhji!
Posted by Roger Pielke, Jr. at 4/13/2011 06:03:00 AM
Email ThisBlogThis!Share to TwitterShare to FacebookShare to Pinterest
Newer Post Older Post Home