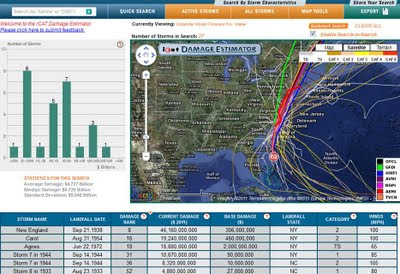 [UPDATE August 27: This AP news story calls the ICAT Damage Estimator a "model" that "predicts" $4.7 billion in damage. Wrong (The $4.7B is the average of the  27 analogues as you can see in the image above).  The ICAT site is simply a tool to look at historical analogues and offers no predictions of the future.  The WSJ does a much better job discussing the issue.]

I've had a bunch of calls today, presumably following up from Nate Silver's post at the NYT, on potential damage from Irene.

I have used the ICAT Damage Estimator to look at all storms that fall within the spread of the various model projections (displayed above, as of 9AM MT) and here are the top  6 storms that come up.

None of the storms is really a good analogue. We should expect to see damage along the entire eastern seaboard, as well as a considerable amount of damage from inland flooding (not included in these numbers).

It wouldn't be anything more than a guess to speculate at this point on Irene's total impact, but it does seem safe to say that it's effects will be widespread and the damage total considerable.
Posted by Roger Pielke, Jr. at 8/26/2011 09:10:00 AM
Email ThisBlogThis!Share to TwitterShare to FacebookShare to Pinterest
Newer Post Older Post Home