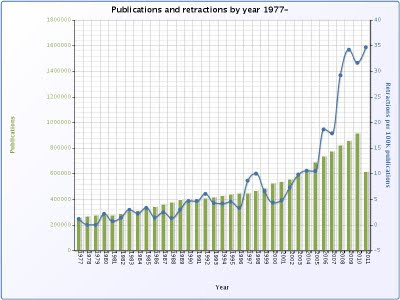 The Wall Street Journal reports that retractions of scientific papers have surged in recent years, with the top 3 journals issuing retractions being PNAS, Science and Nature.  The graph above shows the increase in the rate of retracted papers.


[T]here were just 22 retraction notices that appeared in journals 10 years ago, but 139 were published in 2006 and by last year, the number reached 339. Through July of this year, there were a total 210 retractions, according to Thomson Reuters Web of Science, which maintains an index of 11,600 peer-reviewed journals.
Meanwhile, retractions related to fraud rose more than sevenfold between 2004 and 2009, exceeding a twofold rise traced to mistakes, according to an analysis published in the Journal of Medical Ethics. After studying 742 papers that were withdrawn from 2000 to 2010, the analysis found that 73.5 percent were retracted simply for error, but 26.6 percent were retracted for fraud. Ominously, 31.8 percent of retracted papers were not noted as retracted (read the abstract).

The conclusion? Either there is more fraud or more policing? Ivan Oransky, the executive editor of Reuters Health and a co-founder of the Retraction Watch blog that began recently in response to the spate of retractions, writes us that the simple use of eyeballs and software that can detect plagiarism has made it possible to root out bad papers.

He also notes, however, that there are more journals, which explains why there are more papers, in general, being published. “So the question is whether there have been more retractions per paper published,” Oransky writes, and then points to this chart to note that were, indeed, many more.

“That’s really no surprise, given the increasing numbers of eyeballs on studies, and the introduction of plagiarism detection software. It’s unclear whether the actual amount of misconduct and legitimate error has grown; it may just be that we’re picking up on more of it,” he continues. “What makes it difficult to tell is a problem we often see at Retraction Watch: Opaque and unhelpful retraction notices saying only ‘this study was withdrawn by the authors.’ How does that make for transparent science? We think journals can do a lot better, by demanding that authors and institutions come clean about what went wrong.”

And why is there more fraud? As the Wall Street Journal notes, there is a lot to be gained - by both researchers and journal editors - to publish influential papers. “The stakes are so high,” The Lancet editor Richard Horton tells the Journal. “A single paper in Lancet and you get your chair and you get your money. It’s your passport to success.”

The Retraction Watch website has recently celebrated its one-year anniversary.  One thing you'll notice is that most of the attention to retractions occurs in the medical sciences. Here is a leading question -- is that because that area of research is more subject to error or fraud?