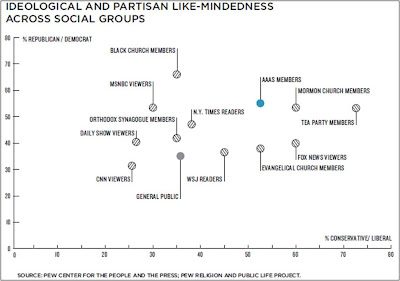 One part of Matthew Nisbet's recent report that has received very little attention is its comparative analysis of ideological and partisan perspectives of members of the American Association for the Advancement of Science.

Dan Sarewitz has discussed the problems with the ideological and partisan likemindedness of our scientific community, which has been exploited and reenforced in political debates:


During the Bush administration, Democrats discovered that they could score political points by accusing Bush of being anti-science. In the process, they seem to have convinced themselves that they are the keepers of the Enlightenment spirit, and that those who disagree with them on issues like climate change are fundamentally irrational. Meanwhile, many Republicans have come to believe that mainstream science is corrupted by ideology and amounts to no more than politics by another name. Attracted to fringe scientists like the small and vocal group of climate skeptics, Republicans appear to be alienated from a mainstream scientific community that by and large doesn't share their political beliefs. The climate debacle is only the most conspicuous example of these debilitating tendencies, which play out in issues as diverse as nuclear waste disposal, protection of endangered species, and regulation of pharmaceuticals.

How would a more politically diverse scientific community improve this situation? First, it could foster greater confidence among Republican politicians about the legitimacy of mainstream science. Second, it would cultivate more informed, creative, and challenging debates about the policy implications of scientific knowledge. This could help keep difficult problems like climate change from getting prematurely straitjacketed by ideology. A more politically diverse scientific community would, overall, support a healthier relationship between science and politics.

It also fits perfectly into a political strategy that holds that arguments about science can help to resolve political debates.  Climate change is only the most visible of this tendency, where the empirical evidence shows that efforts to wage climate politics through climate science have had the greatest effect in magnifying the partisan divide.  Some are blinded by these dynamics -- for instance Chris Mooney excuses the extreme partisanship/ideology of AAAS members by blaming  . . . George W. Bush.

Anyone concerned with political decision making in a society that contains a diversity of partisan and ideological perspectives should be concerned that, in one sector at least, the experts that we rely on have views that are far different than the broader society.  One response to this would be to wage a political battle to try to convert the broader society to the values of the experts, perhaps through the idea that improving science communication or education a great value transformation will occur.

My sense is that this strategy is not just doomed to fail, but will have some serious blowback effects on the scientific community itself.  More likely from my view is that such efforts to transform society through science will instead lead to the partisan debates across society taking firmer root within our expert communities. This is a topic that deserves more discussion and debate.  Dan Sarewitz concludes provocatively that, "A democratic society needs Republican scientists."

It is important to recognize that hyper-partisans like Joe Romm and Chris Mooney will continue to seek to poison the wells of discussion within the scientific community (which is left-leaning, so this is a discuss that needs to occur at least to start within the left) through constant appeals to partisanship and ideology.  Improving the role of science and scientists in our political debates will require an ability to rise above such efforts to associate the scientific community with only a subset of partisan and ideological perspectives.  But science and expertise belongs to all of us, and should make society better as a whole.
Posted by Roger Pielke, Jr. at 4/21/2011 09:06:00 AM
Email ThisBlogThis!Share to TwitterShare to FacebookShare to Pinterest
Newer Post Older Post Home