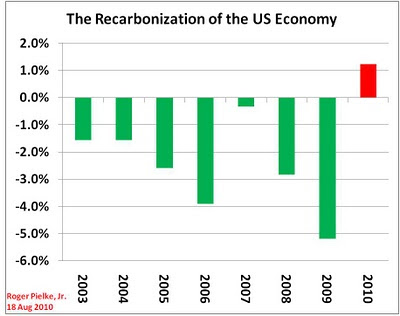 As readers of this blog know -- and readers of my book will learn -- to stabilize carbon dioxide concentrations at a low level (e.g., 450 ppm)  requires global annual rates of decarbonization of greater than 5%.

The preliminary 2010 US data indicates that the United States in in fact not decarbonizing but recarbonizing (and to emphasize, it is preliminary).  You can see this in the figure above.  The Department of Energy provides an explanation (and see this post from earlier today):

With coal and natural gas consumption increasing at a rate faster than economic growth, the result is a recarbonization of the economy.  Hopes that the economic downturn or various stimulus investments have lead to an acceleration of decarbonization were always dubious, that should now be fairly certain (for an earlier discussion see this post).

If this data does not indicate to advocates of action on climate change that a radical new direction is needed, then I'm not sure what would.
Posted by Roger Pielke, Jr. at 8/18/2010 02:49:00 PM
Email ThisBlogThis!Share to TwitterShare to FacebookShare to Pinterest
Newer Post Older Post Home