A Resurgence of Coal Power in the US 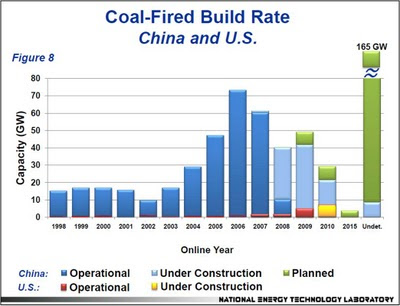 The AP describes the continuing presence of coal power in the United States:


Utilities across the country are building dozens of old-style coal plants that will cement the industry's standing as the largest industrial source of climate-changing gases for years to come.

An Associated Press examination of U.S. Department of Energy records and information provided by utilities and trade groups shows that more than 30 traditional coal plants have been built since 2008 or are under construction.

The construction wave stretches from Arizona to Illinois and South Carolina to Washington, and comes despite growing public wariness over the high environmental and social costs of fossil fuels, demonstrated by tragic mine disasters in West Virginia, the Gulf oil spill and wars in the Middle East.

But like everything related to the energy and climate, it is useful to have a sense of proportion.  So have a look at the figure above, which comes from a US DOE presentation earlier this year (PDF).  The figure shows the coal power build rate - actual and planned -- for the US and China.

The red parts of the bars for 2008 and 2009 (and perhaps part of the yellow for 2010) are what the AP article is describing.  The broader context are the blues and greens.
Posted by Roger Pielke, Jr. at 8/18/2010 07:04:00 AM
Email ThisBlogThis!Share to TwitterShare to FacebookShare to Pinterest
Newer Post Older Post Home