Basic Research as a Political Symbol

I have a retrospective book review in the current issue of Nature on Science--The Endless Frontier, the classic US government report on science policy released 65 years ago.  Here is an excerpt from the essay (and a version of the figure that accompanies the piece):


The influence of Science —The Endless Frontier stems largely from its timing, coming at the tail end of a war in which science-based technology had been crucial. The development of the atomic bomb, radar and penicillin meant that Bush’s declaration that “scientific progress is essential” to public welfare found a receptive audience. Bush also adopted innovative language that capitalized on this new-found government credulity.

In particular, he broadened the meaning of the phrase ‘basic research’. In using it to refer simultaneously to the demands of policymakers for practical innovation and to the interests of scientists in curiosity-driven enquiry, he satisfied both sectors. 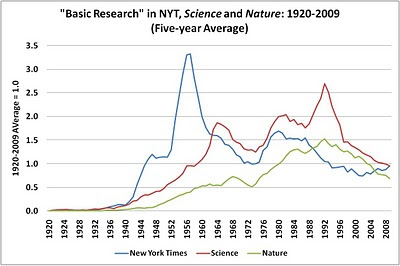 Before the report, pleas by scientists to expand government support for research had met with only limited success. Prominent calls along similar lines were made to no avail in 1924 by the UK National Union of Scientific Workers (NUSW) and in 1929 by US agriculture secretary Arthur Hyde. The poor response might have been due to the confused messages\ offered to protect the integrity of pure research. In a 1921 essay, for example, the NUSW president declared that scientific research has “no industrial bearing at all” but later stated that it is “the foundation of progress in industry”. Not surprisingly, most policy-makers shrugged. Some political leaders did champion government support for basic research before 1945. Prior to Hyde’s appointment, US agriculture secretary Henry C. Wallace had argued in the early 1920s (one of the first narrow uses of the phrase) that the agency should fund more “basic research” to enhance agricultural productivity. At the time, Wallace’s call for investment was counter-intuitive because US agriculture was suffering from being too efficient; a surfeit of production depressed prices and caused hardship for farmers. But he reasoned presciently that consumption would catch up in the longer term. Wallace did not live to see his vision realized, but his son, Henry A. Wallace, picked up the baton, first as agriculture secretary under Roosevelt (1933–40) and then as Roosevelt’s vice-president (1941–45). During the war, the younger Wallace served as liaison between Roosevelt and Bush.

Bush was selected by his friend and neighbour Vice-President Wallace to draft Science — The Endless Frontier. As director of the Office of Scientific Research and Development, Bush had credibility and good connections within both the science and policy camps. This meant that when the report was released — less than two weeks before the Hiroshima atomic bomb was detonated — it was well positioned to influence. When Wallace’s political fortunes fell, leadership in science policy completed its switch from the agriculturists to the physicists, and the language of science policy changed too.

During the fall I'll complete a much more in depth piece on the history of US (and to some degree also UK) science policy in the first half of the last century, with a particular focus on the role of "basic research" as a political symbol.  Among the interesting issues I'll explore in greater depth than I was able to in the Nature piece is the catalytic role played by Henry A. Wallace and his son Henry C. Wallace (pictured above on the cover of Time) in the establishment of the science policies which guide research to this day.

The role of the Wallaces in the evolution of science policy seems to have been mostly overlooked, perhaps as a consequence of the younger Wallace's fall from political grace in the 1940s, which itself is a very interesting story.  I'll have more on such things in coming months.  Meantime, you can read my Nature essay here and in you are not a subscriber it is here in PDF on my personal page as well.
Posted by Roger Pielke, Jr. at 8/24/2010 08:05:00 AM
Email ThisBlogThis!Share to TwitterShare to FacebookShare to Pinterest
Newer Post Older Post Home