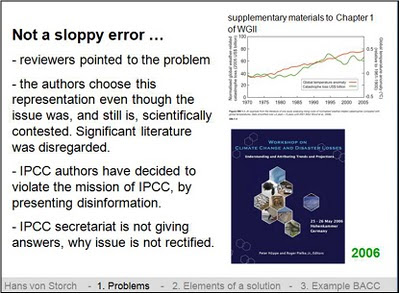 The slide above comes from the presentation of Hans von Storch to the InterAcademy Review of the IPCC, presented earlier this week in Montreal. The slide references the misrepresentation of the issue of disasters and climate change by the IPCC. von Storch is very clear in his views:

IPCC authors have decided to violate the mission of the IPCC, by presenting disinformation.

Not only did the IPCC misrepresent the science of disasters and climate change, but went so far as to issue a highly misleading press release to try to spin the issue and put an unprepared IPCC WG2 chair on the BBC to try to defend the undefensible. I was promised a response from the IPCC to my concerns, a response that has never been provided.

A former head of the IPCC, Robert Watson, says the following in the context of the 2035 glacier issue, but could be equally applied to the disaster issue:

To me the fundamental problem was that when the error was found it was handled in a totally and utterly atrocious manner.

The IAC Review of the IPCC is fully aware of this issue, and it will be interesting to see what their report says on the topic. Meantime, the IPCC is continuing its preparations for its next assessment in business-as-usual fashion.
Posted by Roger Pielke, Jr. at 6/17/2010 08:46:00 AM
Email ThisBlogThis!Share to TwitterShare to FacebookShare to Pinterest
Newer Post Older Post Home