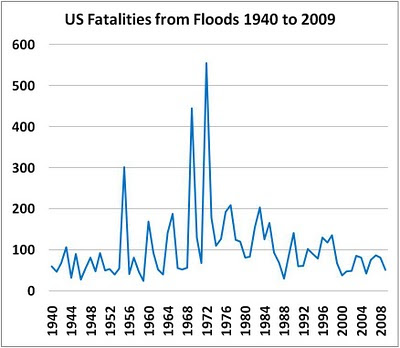 At the Washington Post's Capitol Weather Gang, Andrew Freedman grapples with how to discuss climate change in the context of flash floods over the past few weeks:

. . . the question of whether to raise climate change in discussions of flash floods (and other extreme events) constitutes more than a quibble over semantics. The media has a responsibility to report what the science says, even in the context of a breaking news story, such as a flood event or heat wave. The science has become clearer, although by no means certain, that local precipitation extremes may be connected to climate change. Yet, to date, the mainstream media has shied away from raising climate change in extreme event coverage. This is unfortunate, because it constitutes a missed opportunity to make climate change relevant to people in the here and now, rather than an abstract concept in the distant future.

In contrast, Andy Revkin who blogs at the New York Times suggests caution in making connections between a few events and larger climatic patterns.

So what is the thing for journalists to say about climate change and recent flood disasters? Easy. There is presently no evidence for a signal of climate change (human-caused or otherwise) leading to an increase in flood disasters. If there is any signal, it is far too small to see and it will take many decades for such a signal to emerge.

It seems like it would be easy and straightforward to simply say what the science shows, but making climate change connections with disasters seems to be like catnip for journalists and advocates alike.
Posted by Roger Pielke, Jr. at 6/16/2010 08:59:00 AM
Email ThisBlogThis!Share to TwitterShare to FacebookShare to Pinterest
Newer Post Older Post Home