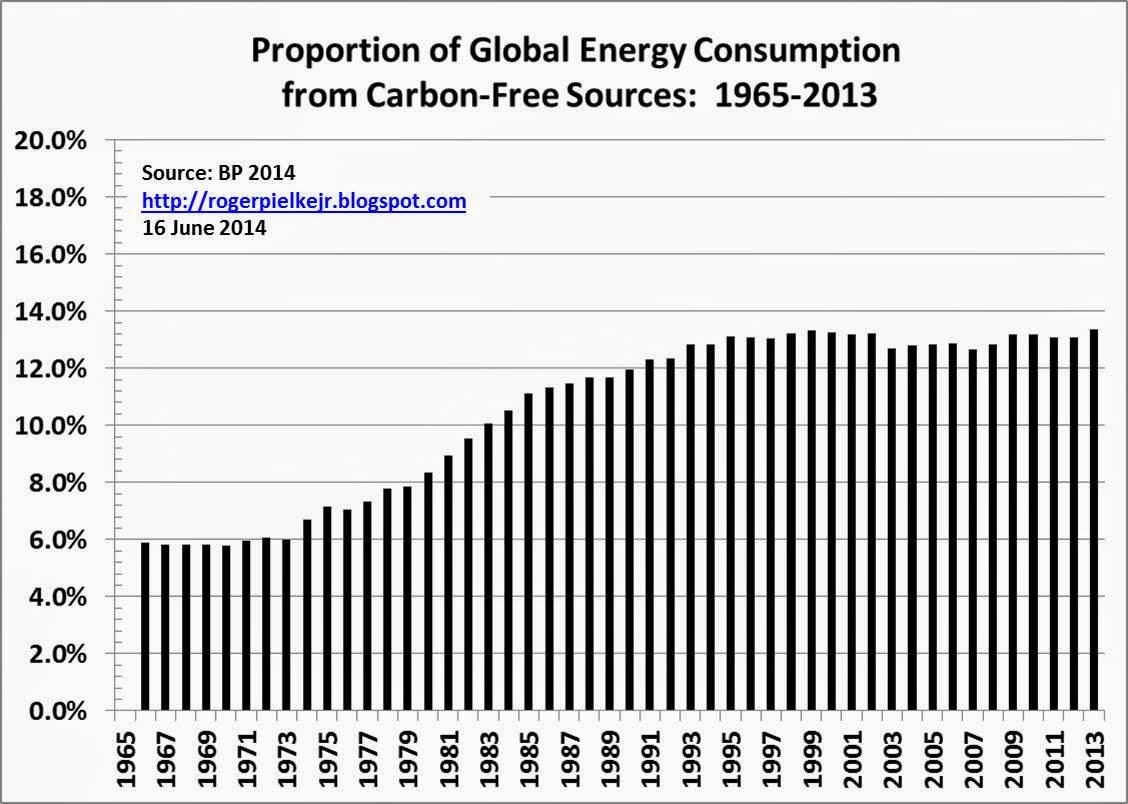 The graph above shows data from the BP Statistical Review of World Energy 2014, which was released today. It shows the proportion of global energy consumption that comes from carbon-free sources.

The proportion of carbon-free energy consumption is a far more important metric of progress with respect to the challenge of stabilizing carbon dioxide levels in the atmosphere than looking at carbon dioxide emissions. The reason for this is that emissions are a consequence of energy consumption, and the way that we influence emissions is through energy technologies and their use in the economy. So looking directly at energy consumption is a much more direct and relevant way to understand the technological challenge of emissions reductions. From a policy perspective, looking solely at emissions can easily deceive.

To stabilize atmospheric concentrations of carbon dioxide requires that this proportion exceed 90%, independent of how much energy the world ultimately consumes. But don't take my word for it, do the math yourself. The timing of exceeding that 90% threshold will determine the atmospheric concentration level at which stabilization ultimately occurs.

If the increase in the carbon-free proportion from 2012 to 2013 (of 0.17%) is taken as a trend going forward, then the 90% threshold will be exceeded in the year 2465. Fortunately, linear projections of most anything related to future energy are wrong.

What you should take from this however is that there remains no evidence of an increase in the proportion of carbon-free energy consumption even remotely consistent with the challenge of atmospheric stabilization of atmospheric carbon dioxide. Those who claim that the world has turned a corner, soon will, or that they know what steps will get us around that corner are dreamers or fools. We don't know. The sooner we accept that, the sooner we can design policies more compatible with policy learning and muddling through.
Posted by Roger Pielke, Jr. at 6/16/2014 07:12:00 AM
Email ThisBlogThis!Share to TwitterShare to FacebookShare to Pinterest
Newer Post Older Post Home