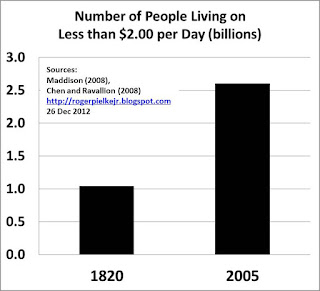 The graph above shows the number of people living on less than $2.00 per day, in apples to apples PPP dollars (see below for details), in 1820 and 2005. There are more than 250% more people today living at this very low level of income than almost 200 years ago.

The figure for 1820 comes from the Maddison global GDP dataset, and actually works out to $1.82 in 1990 international dollars (i.e., PPP adjusted values, which will be closer to $2.00 in 2005 dollars). Maddison estimated total global population in 1820 to be 1.04 billion, so the maximum number of people living at less than $2.00 is 1 billion. The actual value is no doubt less than this, but by how much is not known.

Some more details: From 1820 to 2005 global population increased by 620% and per capita GDP increased by 1,045% (again, PPP-adjusted dollars, both figures from the Maddison dataset).
Posted by Roger Pielke, Jr. at 12/26/2012 04:05:00 PM
Email ThisBlogThis!Share to TwitterShare to FacebookShare to Pinterest
Newer Post Older Post Home