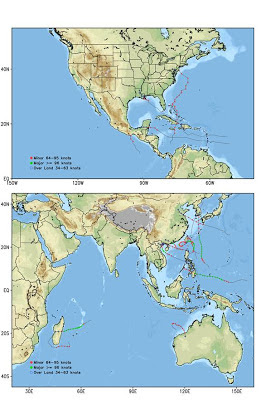 Earlier this year, Jessica Weinkle, Ryan Maue and I published a paper in the Journal of Climate on trends in global landfalling hurricanes (a PDF can be found here as well). At the global level the data is good from 1970. Our analysis covered through 2010. With 2012 almost in the books I recently asked Ryan if he could provide an initial tabulation of the 2012 data (note that the data could be revised from these initial estimates, and 2012 is still not quite over). The tracks of the fourteen landfalling storms of 2012 can be seen in the graphic at the top of this post. 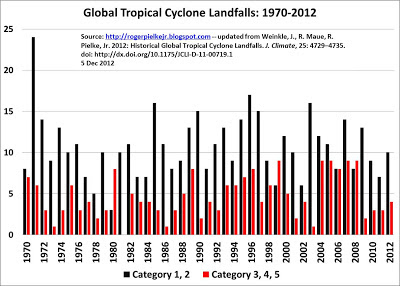 What we can glean from this data is that in terms of US and global damage, things will get much worse when the statistics return to the "old normal" (and this is independent of whether you think such a return is due to natural variability, human-caused climate change or the prophesies of Nostradamus). It will happen -- and you can take that to the bank.

For those interested in the details, here from Ryan are the preliminary details for 2012 to date:

** with the appropriate caveats about operational TC tracks subject to revision, which is expected in the post-season analyses.

My list of 2012 storms includes a total of 14 Hurricane Strength Landfalls of which 4 were major.

Southern Indian Ocean:  1 major and 1 minor Cyclone landfall
Giovanna (12S) -- major over Madagascar
Lua (17S) -- minor over Australia, was 95 knots, so could be an upgrade.

Lots more great data and graphs, including the one below on total global tropical cyclone activity (not just those that make landfall) at his website here.