The Work of a Nation

Readers of this blog who have followed my discussions of innovation, productivity and economic growth will recognize two competing perspectives among economists on the role of innovation as a source of our current economic difficulties, neither of which I think adequately captures the innovation challenge facing the US economy.

One of these competing views, represented by the work of Robert Gordon and most recently expressed in this weekend's WSJ, is that we have reached the end of innovation and productivity growth, and thus economic growth will slow to a crawl. Gordon writes that "the future of American economic growth is dismal" following from what he says is a decelerating trend in rates of economic growth and innovation over the past half century. As I have shown in a series of posts, the data do not support Gordon's argument - US per capita economic growth rates are largely unchanged since 1870.

At the opposite pole from Gordon are those economists who argue that rather than reaching the end of innovation and productivity growth, we in fact have far too much [UPDATE: See below for a response from Brynjolfsson]. Erik Brynjolfsson and Andrew McAfee argue that we "need to start preparing for a technology-fueled economy that’s ever-more productive, but that just might not need a great deal of human labor." Similar to Gordon they base their argument on an analysis of recent trends in labor productivity as compared to employment, finding a "great divergence." Here as well, I don't think that the data actually supports their argument. 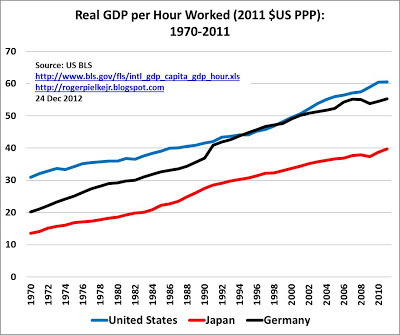 The graph above provides further evidence that the productivity hawks and doves are both reading into the data signs that just are not there. The graph shows data on GDP per hour worked in the economies of the the US, Germany and Japan (data from BLS). There is no indication of a rapid acceleration or deceleration in the output per hour worked in any of these three economies. (The one-time effect of the reunification of Germany in 1991 does stand out.) What this graph suggests is that changes in productivity are not the source of more fundamental issues associated with employment, income, equality and other economic outcomes that we care about. 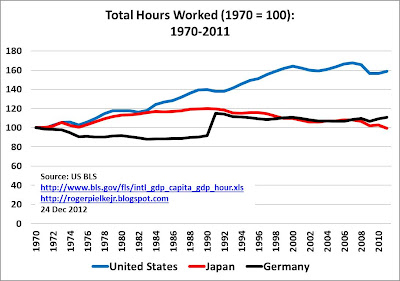 The graph above, also from the BLS data, tells an interesting story. It shows the total hours worked annually across the entire economies of each of the US, Germany and Japan. The graph shows that Japanese workers were performing the same total amount of work in 2011 as in 1970. We can deduct from this that all gains in Japan's GDP since 1970 are a result of productivity gains. Germany has seen its total work increase by 11% since 1970, but with essentially no change since reunification. Since 1970 Germany has seen an almost 30% reduction in hours worked per employed person (Japan saw a 15% decline over the same period). Germany has policies focused on maintaining high employment, which leads to lower rates of change in GDP per employed person, but which has not penalized GDP growth per hour worked, as shown in the first graph above. Germany provides good evidence that productivity gains and employment need not be closely related, and employment policies matter a great deal for aggregate levels of employment.

The United States, interestingly, did the same total amount of work in 2011 as it did in 1998, despite seeing overall population grow by 36 million and employment grow by 8.5 million. Since 1970 the average US worker is working only 8% less than in 1970, but most of this decrease has occurred since 1998. With global GDP increasing by 133% since 1998 the world obviously has not been suffering for a lack of work to be done. Indeed, according to the McKinsey Global Institute the world added 1.1 billion new jobs from 1980 to 2010, with 164 million in so-called "advanced economies."  Unlike Japan and Germany, the US does not have a population that is either decreasing (in the case of Japan) or slowly increasing (Germany).

It seems that at the root of US economic problems lies a challenge of stagnant work, a condition that cannot be attributed to too much or too little productivity gains -- the work that is being done is improving its productivity as it always has. Further, the stagnation in work appears to have pre-dated the recent economic crisis, but was no doubt exacerbated by it.

In this context, reducing unemployment would mean sharing work more broadly (e.g., the average German worker works 20% less hours per year than the average American worker) or simply creating or finding more work to be done. Sharing work makes a lot of sense in a slowly growing or shrinking workforce, as in Japan or Germany. Such policies may make sense in the US, but they are not long-term solutions to the challenges of work in an economy that is seeing significant population growth. In that case more work is needed. Creating or finding more work means innovating -- and specifically, by competing more effectively in existing markets or creating new markets to compete in.

In an era of globalization, we have learned that competing more effectively in existing markets can be difficult and, as has been the case in manufacturing, may lead to continued economic growth unmatched by growth in employment. By contrast, the prospect of creating and competing in new markets or even leveling the playing field in old markets offers potential for creating more work. More fundamentally, as the world has become wealthier there is increasing demand for economic necessities such as infrastructure, energy and food. The United States is well-positioned on these fronts to put the nation to work. However, doing so requires a forward looking approach to innovation and a renewed commitment to globalization and economic growth around the world.


One correction: Andy and I don't think there is "far too much" innovation and productivity growth.  We are huge fans of both and say so repeatedly in our book and our other writings.  In fact, we'd like to see more innovation in work practices and organizations to keep up with the technological advances, aka learn how to better race with machines.   Some people mistakenly lump us with the luddites, but that's about 180 degrees from where we are, even if we don't think technology always and everywhere helps all people evenly.