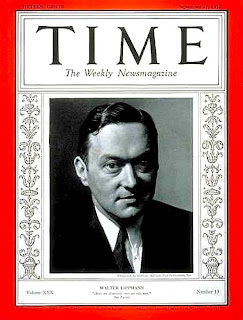 Walter Lippmann was one of the greatest American political writers of the last century. Here are a few excerpts from his 1955 book The Public Philosophy that remind us that the politicization of information is far from a new concern. He also emphasizes not just the importance of open debate in response, but that there is no viable alternative in democratic systems.

I've posted this up before and will surely do so again sometime.

On the transformation of the complex to the simple in public discourse:


. . . when the decision is critical and urgent, the public will not be told the whole truth. What can be told to the great public it will not hear in the complicated and qualified concreteness that is needed for a practical decision. When distant and unfamiliar and complex things are communicated to great masses of people, the truth suffers a considerable and often a radical distortion. The complex is made over into the simple, the hypothetical into the dogmatic, and the relative into the absolute. Even when there is no deliberate distortion by censorship and propaganda, which is unlikely in time of war, the public opinion of masses cannot be counted upon to apprehend regularly and promptly the reality of things. There is an inherent tendency in opinion to feed upon rumors excited by our own wishes and fears. [p. 27]

On balance in the media and in public debates Lippmann is quite clear about maintaining conditions that foster debate and the exchange of perspectives.

. . . when the chaff of silliness, baseness, and deception is so voluminous that it submerges the kernels of truth, freedom of speech may produce such frivolity, or such mischief, that it cannot be preserved against the demand for a restoration of order or of decency. If there is a dividing line between liberty and license, it is where freedom of speech is no longer respected as a procedure of the truth and becomes the unrestricted right to exploit the ignorance, and incite the passions, of the people. The freedom is such a hullabaloo of sophistry, propaganda, special pleading, lobbying, and salesmanship that it is difficult to remember why freedom of speech is worth the pain and trouble of defending it.

And because the purpose of the confrontation is to discern truth, there are rules of evidence and of parliamentary procedure, there are codes of fair dealing and fair comment, by which a loyal man will consider himself bound when he exercises the right to publish opinions. For the right to freedom of speech is no license to deceive, and willful misrepresentation is a violation of its principles. It is sophistry to pretend that in a free country a man has some sort of inalienable or constitutional right to deceive his fellow men. There is no more right to deceive that there is a right to swindle, to cheat, or to pick pockets. It may be inexpedient to arraign every public liar, as we try to arraign other swindlers. It may be a poor policy to have too many laws which encourage litigation about matters of opinion. But, in principle, there can be no immunity for lying in any of its protean forms.

In our time the application of these fundamental principles poses many unsolved practical problems. For the modern media of mass communication do not lend themselves easily to a confrontation of opinions. The dialectical process for finding truth works best when the same audience hears all the sides of a disputation. . . Rarely, and on very few public issues, does the mass audience have the benefit of the process by which truth is sifted from error – the dialectic of debate in which there is immediate challenge, reply, cross-examination, and rebuttal.

Yet when genuine debate is lacking, freedom of speech does not work as it is meant to work. It has lost the principle which regulates and justifies it – that is to say, dialectic conducted according to logic and the rules of evidence. If there is not effective debate, the unrestricted right to speak will unloose so many propagandists, procurers, and panders upon the public that sooner or later in self-defense the people will turn to censors to protect them. An unrestricted and unregulated right to speak cannot be maintained. It will be curtailed for all manner of reasons and pretexts, and to serve all kinds of good, foolish, or sinister ends.

For in the absence of debate unrestricted utterance leads to the degradation of opinion. By a kind of Gresham’s law the more rational is overcome by the less rational, and the opinions that will prevail will be those which are held most ardently by those with the most passionate will. For that reason the freedom to speak can never be maintained merely by objecting to interference with the liberty of the press, of printing, of broadcasting, of the screen. It can be maintained only by promoting debate.

In the end what men will most ardently desire is to suppress those who disagree with them and, therefore, stand in the way of the realization of their desires. Thus, once confrontation in debate is no longer necessary, the toleration of all opinions leads to intolerance. Freedom of speech, separated from its essential principle, leads through a short transitional chaos to the destruction of freedom of speech. [pp. 96-101]

The antidote to concerns about "frivolity" and "mischief" in public debates is not to try to silence or demagogue one's opponents, but rather to invite them to participate in a "genuine debate."  Today, on many topics genuine debate seems to be more often avoided than engaged.
Posted by Roger Pielke, Jr. at 12/05/2011 07:19:00 AM
Email ThisBlogThis!Share to TwitterShare to FacebookShare to Pinterest
Newer Post Older Post Home