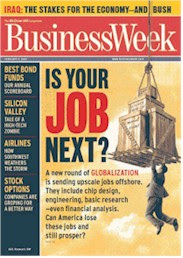 At VoxEu David Hummels and colleagues provide an overview of a recent paper which explored the effects of the offshoring of jobs on demand for skills, and in particular the value of a college education, focused on a Danish case study.

They reach some interesting conclusions.  First, while they find that offshoring leads firms to increase wages of the college-educated and decrease the wages of those without a college degree, there are some surprising findings at a more detailed level.

Perhaps most surprising is the finding that a more globalized workforce leads to a premium for communication and social science skills:


When we examine the effects of offshoring on wages for different knowledge groups, we find that offshoring has the largest positive effect on occupations that require communication and language (premium of +4.4%), followed by social sciences (+3.7%), and maths (+2.7%). The premium for natural sciences and engineering is close to 0. This may seem curious given the policy emphasis on STEM (Science, Technology, Engineering, and Maths) education in many advanced economies, but if science and maths are universal languages, jobs requiring them can be done anywhere with an educated workforce.

The primacy of communication in our results is broadly consistent with findings on immigration and economy-wide task specialisation by Peri and Sparber (2009) and Ottaviano et al. (2010) that highlight natives’ comparative advantage in language and communication tasks. We find that offshoring firms not only retain workers doing communication-intensive tasks, but that these workers actually become more valuable when offshoring rises. Why? One possible explanation is that offshoring increases interactions between domestic workers and foreign workers from different cultural backgrounds, and those differences raise the cost of communicating within the firm (Lazear 1999). Having domestic workers with finely tuned communication and language skills and social scientists with knowledge of other cultures and societies may be useful in overcoming offshoring-induced costs of cross-cultural dealing.

The paper also argues that the negative effects of offshoring disproportionately (negatively) affect a small number of workers, with positive effects experienced by many more. The negative effects can be observed in the ranks of both the college- and non-college-educated workers.


All this suggests that getting a degree is perhaps less important than what you study and who you work for. Rather than focus on educational attainment as an end in itself, policy might better focus on specific skills that are valuable in a globalising world. Unfortunately, policymakers appear to be leaning the wrong way with their emphasis on the so-called STEM disciplines. We find that rising offshoring leads firms to value these knowledge sets less than communication, language, and social science skills.

But the most profound earnings effects are found in workers displaced due to offshoring. Unlike the normal job gains and losses that occur as firms grow and fail, globalisation shocks can result in sharp reductions in demand, economy-wide, for specific tasks. Re-attaching to the workforce may then require a more fundamental retraining of these workers. It remains an open question whether the programmes in place to retrain workers are adequate to the task.

The full paper can be found here.
Posted by Roger Pielke, Jr. at 12/12/2011 10:51:00 AM
Email ThisBlogThis!Share to TwitterShare to FacebookShare to Pinterest
Newer Post Older Post Home