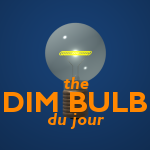 The dim bulb saga continues. Congress in its wisdom, has decided to try to score some political points by revisiting an issue that was largely dormant in a political sense and largely resolved in a policy sense. That issue is of course light bulb standards. In the Omnibus Budget bill, which has nothing to do with light bulbs, a rider has been attached to overturn the 2007 efficiency standards signed into law by the Bush Administration.

What does the lighting industry say about this turnabout?


The lighting industry has been gearing up since 2007 -- when the standards were originally enacted -- to make light bulbs that meet the requirements.

All five of the major light bulb manufacturers are already selling new incandescent bulbs that give off the same amount of light as a traditional 100-watt bulb using about 30 percent less energy. And while they are not planning to pull those bulbs from the shelves if the controversial language is enacted, they are faced with numerous questions moving forward.

"Eliminating funding for light bulb efficiency standards is especially poor policy as it would leave the policy in place but make it impossible to enforce, undercutting domestic manufacturers who have invested millions of dollars in U.S. plants to make new incandescent bulbs that meet the standards," a group of dozens of lighting manufacturers, efficiency groups and environmentalists said in a letter yesterday to senators.

The opposition to the standards comes from the Tea Party right, but is supported by many Republicans and not too-strongly opposed by many Democrats. But even some Republicans object:


"In the real world, outside talk radio's echo chamber, lighting manufacturers such as GE, Philips and Sylvania have tooled up to produce new incandescent light bulbs that look and operate exactly the same as old incandescent bulbs and give off just as much warm light," Republicans for Environmental Protection Policy Director Jim DiPeso said in a statement. "The only different is they produce less excess heat and are therefore 30 percent more efficient. What's not to like?"

Blocking the standards effectively serves as a slap in the face to light bulb manufacturers, who have been working since 2007 to produce the new bulbs.

***For more, see my op-ed from earlier this year on the role of efficiency standards (put in place by government, industry and the two working together) in stimulating innovation.
Posted by Roger Pielke, Jr. at 12/16/2011 08:48:00 AM
Email ThisBlogThis!Share to TwitterShare to FacebookShare to Pinterest
Newer Post Older Post Home