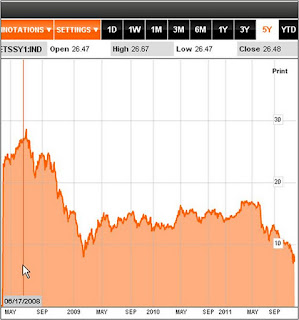 On June 16, 2008, the head of Deutsche Bank Asset Management opined in the FT that carbon allowances on the EU ETS were soon to hit 100 Euros:


The price of European carbon allowances (known as European unit allowances, or EUAs) has risen only modestly this year, to about €27 ($43, £21) a tonne. But market pressures are building that could take the price to €100 a tonne or higher. . .

The markets have an uncanny ability to find the weak hand. Those emitters with too few allowances to cover their carbon output are going to get squeezed by the lack of supply, and a rise to at least €100 looks inevitable.

How did that prediction do?

The graph at the top of this post shows carbon allowances are this week at record lows, at about 7 euros.  The vertical line on the left side of the graph shows the carbon allowance price when the Deutsche Bank prediction was made.

Today, a number of large companies in Europe, presumably in possession of a large number of allowances, petitioned the EU to "prop up" the market:


Royal Dutch Shell, Philips and more than a dozen other top international companies have made an urgent plea to Brussels to prop up the flailing European Union carbon market after another week of plunging prices. . .

In a move to file under "unintended consequences" the group of companies has also asked the EU to think twice about efforts to improve energy efficiency:


Brussels should also rethink the “distorting” impact some of its other policies are having on the carbon market, the companies said, especially an energy efficiency measure the European parliament is due to vote on next week.

I wonder if anyone predicted that outcome?
Posted by Roger Pielke, Jr. at 12/15/2011 07:18:00 PM
Email ThisBlogThis!Share to TwitterShare to FacebookShare to Pinterest
Newer Post Older Post Home