The 2011 Tornado Losses in Context: A Preliminary Analysis 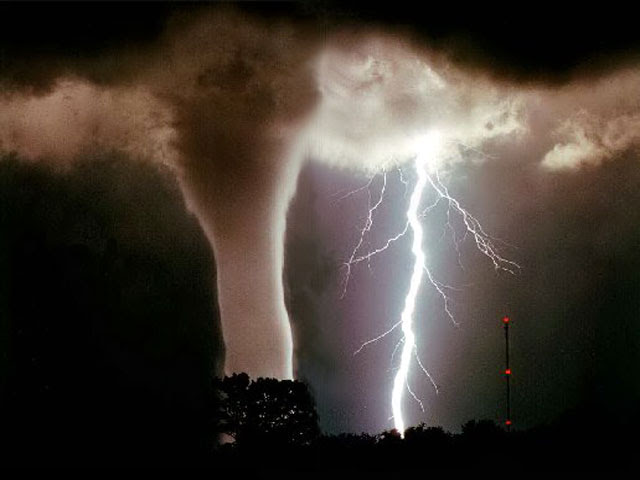 I spent the past several days in Hamilton, Bermuda at a conference organized by the Geneva Association (agenda here in PDF). I gave a talk that used several analyses of US hurricane losses to illustrate the importance for decision making of distinguishing risk (situations where probabilities can be known) from ignorance (situations where they cannot).

Among the many interesting presentations at the meeting was an excellent discussion of the 2011 US tornado season by Kevin Simmons, a professor of economics at Austin College in Dallas. Kevin is one of the nation’s experts on the societal impacts of and responses to tornadoes. He is a co-author (along with Daniel Sutter, an economist at Troy University) of the recent book, Economic and Societal Impacts of Tornadoes (University of Chicago Press, 2010). 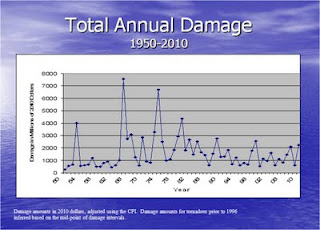 My attention was drawn to one slide in particular from Kevin’s talk (shown at right) which updates the tornado damage figures first presented in his book (with data for 1950-2007) through 2010 (the data is adjusted for inflation). The Simmons/Sutter dataset is the only one that I am aware of that shows US tornado damage since 1950, and is drawn from data kept by the US National Weather Service using a consistent methodology. (Note that the data since the mid-1990s is more accurate than that collected previously, because the NWS cataloged damage using a range in the earlier years. Kevin tells me that they used the midpoint of the range estimates in assembling the data for the earlier years.)

The large economic losses due to the tornadoes of 2011 raise an interesting question: How unusual are the tornado losses of 2011?

The Simmons/Sutter dataset provides one means to answer this question. Regular readers will know that it is not enough to look at disaster data over time, even if it has been adjusted for inflation, for the simple reason that society is always changing. The exact same weather extreme occurring years apart will cause more damage if people build more property and accumulate more wealth in the area affected. Simmons figure shown above has no such “normalization” applied to it.

Actually performing a full normalization of tornado loss data will require some considerable research and effort, and Kevin and I have agreed to take this on together, with a paper on the subject the ultimate goal. But for now, simply because I am curious and have some time to kill on a plane over the ocean, I have calculated the ratio of tornado damage to US GDP for the period 1950 to 2011 as a rough first cut. This calculation should be considered preliminary and, of course, is not peer reviewed.

Here is what I've done: First, here is a graph of tornado damage to GDP for the period 1950 to 2010 using the data from Simmons’ presentation (from the graph shown at the top of this post) and US GDP data from BEA. The graph is scaled such that the 1950 to 2010 average ratio is 100. 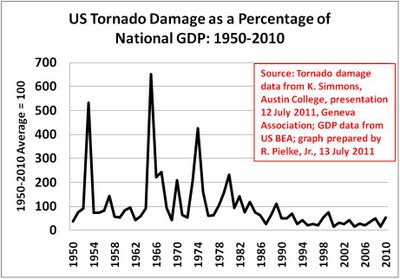 Remarkably, only one year (1989) was above the long-term average in the final 28 years in the series (1983-2010). By contrast 13 of the previous 33 years were above average (1950-1982). While GDP is a rather blunt tool for a normalization, it makes more sense for tornadoes and floods than hurricanes (because hurricanes are geographically concentrated, floods and tornadoes less so). Also, a normalization of hurricane losses adjusted for GDP has been shown to fairly closely approximate a more sophisticated methodology, so it is not unreasonable to start there. The data shows that as a fraction of GDP, tornado damage decreased appreciably from 1950 to 2010.

What about 2011? In his talk, Simmons presented a range of estimates for the costs of the 2011 tornadoes, with the largest being $23.2 billion. He expressed some skepticism about that level being ultimately reached, but said that it was “in the realm of possibility” so I’ll use that number. I also assume that 2011 GDP is 3% higher than 2010. The following graph shows the tornado damage to GDP through present with the 1950-2010 average equal to 100. 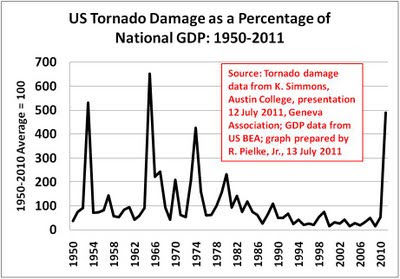 You can see that 2011 is by this measure an extreme year, ranking number 3 since 1950. The loss-to-GDP ratio figure looks remarkably like the figure that shows casualties over time.  It will also be worth comparing to the incidence of strong tornadoes.  And just was the case with casualties, there is no indication of a secular trend in the direction of greater damage. In fact the opposite is the case.

This preliminary analysis (and note that it is preliminary; it is not a prediction of what future research might show) suggests that while the costliest tornado season in absolute terms by a large degree, the impacts seen in this tragic season should not be considered to lie outside of the range of expectations based on historical data on losses in the context of the overall economy. Based on this preliminary look at the data, since 1950 there is no evidence of an increase in damage in tornado loss data adjusted for inflation or that compared to GDP.
Posted by Roger Pielke, Jr. at 7/13/2011 06:00:00 PM
Email ThisBlogThis!Share to TwitterShare to FacebookShare to Pinterest
Newer Post Older Post Home