When Politicians Put Experts Between a Rock and a Hard Place 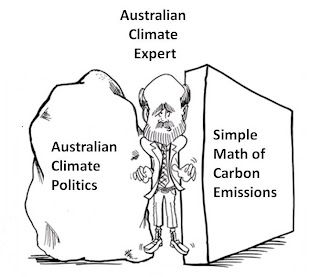 I have been following closely, but not writing much on, the debate in Australia over Julia Gillard's proposed carbon tax.  How it plays out will be fascinating to watch and will provide as much a lesson in Australian politics as anything to do with climate policy.

This report from The Australian provides a great example of how politicians can make life extremely difficult for those experts who share their goals: Ms Gillard told workers at Mandalong's Centennial Coal, in the Hunter Valley, that the mine would stay open for as long as there was coal in the ground.

She goes further even,


The federal government has committed $1.3 billion to protect coal jobs, while Treasury modelling says the industry's output will more than double between 2010 and 2050 under the carbon tax.

But it also says the proportion of Australia's energy supply derived from coal will fall from 80 per cent now to 20 per cent within 40 years. . .

Earlier, Ms Gillard was tackled on ABC radio over the impact of her carbon tax on Australia's biggest coal port.

“How can (the tax) not have a negative impact on economic growth in this region?” an ABC Newcastle presenter asked.

The Prime Minister said Australia would continue to export coal under her carbon tax, dismissing suggestions Chinese demand would tail off as a result.

Tony Abbott, the opposition leader, is plenty happy to hear this line of argument from Gillard:


But the Opposition Leader, speaking in Victoria, said the government plan clearly stated that coal would produce just 20 per cent of the nation's power by 2050.

"The Prime Minister should stop trying to pull the wool over the eyes of people in coal mining regions," Mr Abbott said.

"The whole point of a carbon tax is to get us using less coal. That means less production, less investment and less employment in the coal industry." . . .

Gillard may or may not believe what she is saying about the future of coal production in Australia -- politicians say all sorts of things in the heat of political battle.  What would be interesting would be to see how policy experts who know better who support the proposed tax respond to a question such as the following:

Is Julia Gillard's commitment to increasing coal production in Australia in the coming decades consistent with efforts to accelerate the decarbonization of the global economy?

From a policy or mathematical perspective there is an obviously correct answer to this question -- No.  It may be the case in the context of Australia's current debate that from a political perspective (as a matter of crass expediency) there is a different answer.  How experts deal with this conflict between policy and politics makes for an interesting case study in the politics of expertise.

One the one hand, if an expert answers the question posed above accurately, then s/he will be seen as giving support to the criticisms levied by Tony Abbott against the proposed tax.  On the other hand, if the expert supports the claims made by Julia Gillard, then s/he will be saying something that is incorrect, giving further ammunition to the opposition.  What would you do?

I'll be looking for how experts address this issue, and I'd welcome your pointers as well.
Posted by Roger Pielke, Jr. at 7/20/2011 10:01:00 AM
Email ThisBlogThis!Share to TwitterShare to FacebookShare to Pinterest
Newer Post Older Post Home