BY ALMOST any statistical measure Egyptians are far better off than ever before, even though there are many more of them. The population has nearly doubled in size in just 30 years, from 44m in 1980 to 84m today. Farmers who until the 1970s spent half their working day on the back-breaking labour of lifting irrigation water now use diesel pumps, plough with tractors and thresh their wheat by machine. Life expectancy at birth has risen from 52 years in 1960 to 72 now. Back then Egyptians were lucky to own a transistor radio. Now two-thirds of homes have a satellite receiver, 87% own a fridge, 97% have piped water and 99% have electricity. Egyptians chatter on 57m mobile phones, and the number of passenger cars on the roads has more than doubled in the past decade.

Nearly all Egyptian homes have piped water and electricity, but away from Cairo the power is often cut and taps often produce mere dribbles of water whose poor quality explains high levels of kidney disease. Nationwide, less than half the homes (and less than a third in the poor south) are connected to public sewage systems. In a survey of Egypt’s poorest villagers 91% said the service they needed most urgently was sewers. Visitors to Egypt invariably remark on the grubbiness of its streets. Statistics show that among the poorest fifth of Egyptians 85% of households have no proper means of rubbish disposal, so they burn it, dump it by the side of roads, tip it into canals or feed it to wandering goats and chickens. Some 16m Egyptians, according to the World Bank, inhabit informal and squatter settlements. That may equal the population of Cairo, though because of a muddle of overlapping administrative districts no one is really sure how many people the sprawling capital packs in.

Even Egyptian government economists admit that even as the rich get much richer and Egypt’s small middle class is expanding somewhat, the rest have struggled to keep up with an inflation rate that is far higher than in most comparable countries. The private planes, holiday homes, new highways, airports and supermarkets remain out of their reach. That may help to explain why recently Egypt has seen an uncharacteristic flaring up of strikes and protests of every kind. For the first few months of this year the streets around the parliament were occupied around the clock by angry factory workers, disgruntled tax inspectors or junior doctors, all protesting against their miserable pay.

Egypt is not often discussed in terms of carbon dioxide emissions (See figure below). After all, its annual emissions barely put it into the top 60 emitters, with its entire annual emissions about the same as China emits in a week. Even so, look at what is going on in Egypt as described in the paragraphs above. 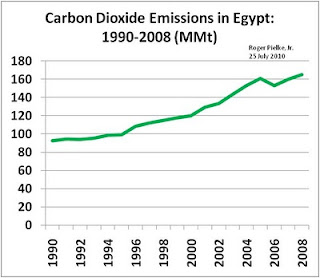