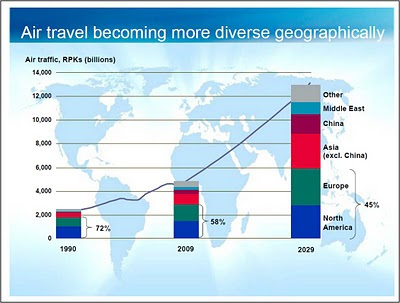 The incredible graph above comes from Boeing's forecast of air travel to 2030 (PDF). The figure shows that RPKs (revenue passenger kilometers) are projected to increase by a factor of 6 by 2029 from their 1990 values. Boeings' forecast from 2000 for 2000-2019 underforecast growth in air travel demand.

What is a critical factor for anticipating growth in demand for air travel? Not surprisingly, GDP growth:

Here is what Boeing says about the relationship between GDP and air travel:

Growth in air travel, measured in revenue passenger-kilometers (RPK), has historically outpaced economic growth, represented by GDP, by approximately 1.5 to 2.0 percent. This leads us to conclude that about 60 to 80 percent of air travel growth can be attributed to economic growth, which in turn is driven, in part, by international trade. This is consistent with the observation that countries whose economies are tied to trade tend to have higher rates of air travel. Air travel revenues consistently total about 1 percent of GDP in countries around the world, regardless of the size of the national economy. Globally, air travel has historically trended toward this consistent share of GDP, such that countries that are below or above this level will generally move toward it over the long term.

The remaining 20 to 40 percent of air travel growth results from the stimulation provided by the value travelers place on the speed and convenience that only air travel can offer. For example, travelers value choice of arrival and departure times, routings, nonstop flights, choice of carriers, service class, and fares. Liberalization is the primary driver enabling value creation in the global air transport network. Liberalization typically gives rise to a "bump" in traffic demand. Studies suggest that as the relative openness of a country's bilateral air service rises from the 20th percentile to the 70th, the resulting increase in traffic can boost air travel demand by an additional 30 percent.

This suggests some simple logic with straightforward implications:

The inevitable implication of this logic is a need for technological advances in either carbon neutral liquid fuels (e.g., biofuels) or carbon capture and storage. Any other options?
Posted by Roger Pielke, Jr. at 7/18/2010 04:54:00 PM
Email ThisBlogThis!Share to TwitterShare to FacebookShare to Pinterest
Newer Post Older Post Home