Decelerating Decarbonization of the Global Economy 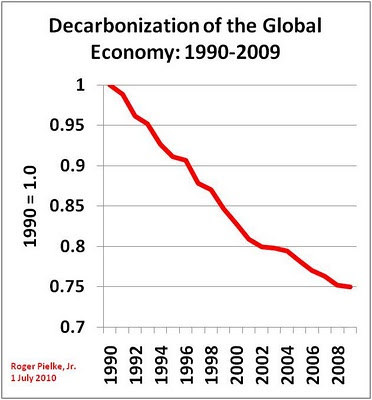 Today, the Netherlands Environmental Assessment Agency released new data on estimated 2009 carbon dioxide emissions. Here is how the NEAA characterizes the findings in a press release:

Despite the continued economic crisis, global emissions of carbon dioxide, the main greenhouse gas, have remained constant in 2009, as strong increases in CO2 emissions from fast-growing developing countries, such as China and India, have completely nullified CO2 emission reductions in the industrialised world.

As readers here know (and as readers of The Climate Fix will learn), a focus on emissions is only part of what matters, as economic growth is an important driver of emissions growth. The variable that matters most for efforts to achieve targets for the stabilization of carbon dioxide in the atmosphere is the amount of carbon dioxide emitted per unit of economic activity. A reduction in this ratio means that the economy has become more energy efficient and/or is transitioning toward carbon neutral energy generation. In other words, decarbonization is a measure of technological progress in energy use and supply.

The graph at the top of this post shows the decarbonization of the global economy 1990 to 2009, with 1990 set to 1.0, using emission data from the NEAA and economic data from Angus Maddison (Note: 2009 GDP is estimated based on growth rate found in the IMF data). I also did the same analysis with economic data from the IMF, reaching the same conclusions. I prefer the Maddison data because it allows cross-country comparisons, and it is also the basis of the analyses in The Climate Fix. The data shows a pronounced slowdown in the rate of decarbonization of the global economy, exactly the opposite effect that climate policies are supposed to be having. This can be seen even more dramatically in the following chart, which shows the annual rate of decarbonization, with a trend line super-imposed in green. This graph shows that the pace of decarbonization has slowed dramatically in recent decades, with important consequences for climate policies. Tom Wigley, Chris Green and I discussed this emerging trend in Nature in 2008 (PDF). To get a sense of what is needed to achieve low stabilization targets (the exact number does not matter, but say 450 ppm), the world would need to achieve annual rates of decarbonization of more than 5-6% for many decades.

The fact that emissions did not increase from 2008 to 2009 is not good news, nor is it a reflection of the positive effects of climate policies. The one-year stabilization occurred because of the dismal state of the economy in North America and Europe, a condition that policy makers are quickly trying to remedy. When economic growth resumes, so too will growth in emissions in these regions. Meanwhile, the world as a whole took a step backwards in terms of decarbonizing the global economy. The world is falling short in terms of energy technology innovation, with consequences that will reach much further than climate policies alone.
Posted by Roger Pielke, Jr. at 7/01/2010 08:27:00 AM
Email ThisBlogThis!Share to TwitterShare to FacebookShare to Pinterest
Newer Post Older Post Home