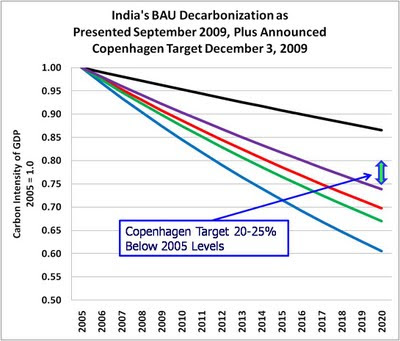 International negotiations on climate policy lead to some strange contortions. In September, the Indian government announced a set of projections for its future emissions that were based on its existing policies, that is:

which do not involve any new policies relevant to GHG mitigation, to determine the trajectory of GHG emissions in the economy without GHG constraints till 2030/31

This is what is usually called "business as usual" or BAU. At the time I was pretty skeptical that India had already embarked on a path of rapid decarbonization, and I wrote:

Today, India has outdone itself by announcing its proposed targets for carbon intensity reductions to 2020 in advance of next week's Copenhagen climate conference:

India announced today that it would reduce its carbon emissions intensity by 20 to 25 per cent by the year 2020 from the 2005 level, quantifying a low carbon growth strategy to combat climate change just as China had done last week.

As shown in the graph above, (calculations based on data from Table 1 on carbon intensity of GDP, at p. 9 of the September Indian report here in PDF) four of the five emissions scenarios presented by India in September as business-as-usual (the five lines that start at 1.0 in 2005) result in reductions in carbon intensity of the Indian economy that far exceed the targets that India has promised today (the green two-headed arrow) as an offering at Copenhagen.

I can see two ways to explain this. One is that India recognizes that its September BAU promises were fanciful at best and is now hedging its promises in the direction of realism. The second is that India today has simply extended its opening negotiating position in the discussions, not wanting to give away too much too soon. Either way, both China and India have introduced some interesting dynamics into the negotiations. Too bad that that politics are pretty much disconnected from the policy.
Posted by Roger Pielke, Jr. at 12/03/2009 04:08:00 PM
Email ThisBlogThis!Share to TwitterShare to FacebookShare to Pinterest
Newer Post Older Post Home