The Earthquake vs. Weather Trick

It has become common of late to observe that the number of weather-related disasters has increased faster than the number of earthquake-related disasters, and imply directly or indirectly that the different must be due to greenhouse gas induced climate changes. The image above comes from UNEP. Or consider this excerpt from a news article out today quoting Munich Re:

Munich Re AG, one of the world's largest reinsurers, Tuesday said economic and insured losses caused by climate change will continue to grow, and called for a near-term deal to ensure a substantial reduction in global greenhouse-gas emissions.

"We need as soon as possible an agreement that significantly reduces greenhouse gas emissions because the climate reacts slowly and what we fail to do now will have a bearing for decades to come," said management board member Torsten Jeworrek.

"In the light of these facts, it is very disappointing that no breakthrough was achieved at the Copenhagen climate summit in December 2009," Mr. Jeworrek said, pointing to the marked increase--more or less tripling--in major global weather-related natural disasters since 1950. . .

"In particular, the trend toward an increase in weather-related catastrophes continues, while there has fundamentally been no change in the risk of geophysical events such as earthquakes," said Peter Hoeppe, who heads Munich Re's Geo Risks Research unit.

The problem with such statements is that everywhere that scholars have looked with respect to weather related disasters no greenhouse gas signal has been seen, including in the peer reviewed work published by Munich Re (e.g., here and here). If a signal of GHG-driven disasters can't be seen in the weather-related events alone, then adding a comparison to earthquakes won't add much to the analysis.

What then might be going on then to explain the disparity in earthquake and weather-related events? The answer should be obvious.

The data in the graph above above are compiled by CRED in Belgium with the assistance of Munich Re. Here are the criteria for an event to be included in the dataset:

For a disaster to be entered into the database at least one of the following criteria must be fulfilled:

Obviously any trends in reporting of events over a long time period will effect the aggregate totals.

My hypothesis is that since 1980, which is the time period for which claims are most often made regarding the weather-earthquake divergence, very few large earthquakes are missed in the CRED database, because earthquakes are relatively rare and their effects are widespread. By contrast weather events, such as floods, are very common and can have very localized impacts that might not be reported or easily added to the CRED database. So the difference between earthquake and weather disasters reflects a relative increase in the report of small sized weather events I have emailed CRED to ask for comprehensive data that will allow me to explore this hypothesis more systematically.

Meantime, I performed the following test. I picked a random region in the CRED EM-DAT database and searched for all flood events in West Africa (Benin; Burkina Faso; Cape Verde Is; Cote d'Ivoire; Gambia The; Ghana; Guinea; Guinea Bissau; Liberia; Mali; Mauritania; Niger; Nigeria; Senegal; Sierra Leone; St Helena; Togo) in the 1980s, 1990s and 2000s. Here is what that data look like: 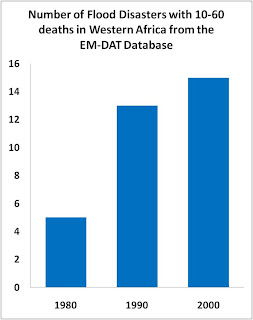 One response to this graphic might be to conclude that an increase in GHG-driven floods are responsible for the 3-fold increase in flood disasters with 10 to 60 people in Western Africa. Another would be to note the obvious -- only 5 events in a decade with a loss of 10 to 60 people is certainly an underestimate in a region with 300 million people, many who are very vulnerable to disasters, subject to frequent flooding and where reporting is probably not very systematic. In fact, the events in the 1990s and 2000s are also probably underestimated by some significant but unknown degree. In any case, to use such data to say anything about human influences on climate is unwise.

The bottom line here is that if you want to look for a signal of GHG-driven climate change, look at quality data systematically collected in particular regions for specific phenomena. If you cannot see a signal in that data, then going to less precise and more aggregated data will not add much value. A comparison of trends in weather and earthquake disasters sheds no light on the attribution of disasters to GHG emissions.
Posted by Roger Pielke, Jr. at 12/29/2009 10:58:00 AM
Email ThisBlogThis!Share to TwitterShare to FacebookShare to Pinterest
Newer Post Older Post Home