Is Our Economic Ignorance Increasing? 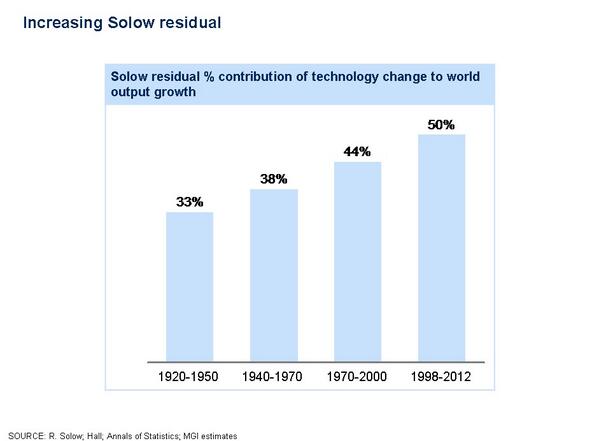 At the Financial Times John Authers writes ($) of the graph shown above:


Compared to expectations pre-crisis, Richard Dobbs of the McKinsey Global Institute suggests companies simply expect less growth than they once did.

More technically, Mr Dobbs points to a steady rise in Solow’s Residual. Named for Robert Solow, the Nobel laureate economist, it refers to the proportion of growth that cannot be accounted for by extra labour or extra capital. From 1920 to 1950, this figure was about 33 per cent. Now, according to McKinsey, the Solow Residual has risen to 50 per cent.

What is the "Solow Residual"? It is a stylized fact (or maybe just a myth) that the Solow Residual is, as stated in the title to the graph shown above, the "contribution of technology change to world output growth."

Actually, as Konstantin Kakaes explained at Slate a few years ago, the Solow Residual does not actually refer to technological change:


Robert Solow, winner of the 1987 Nobel Memorial Prize in Economic Sciences, is famous for, in the recent words of a high-ranking State Department official, “showing that technological innovation was responsible for over 80 percent of economic growth in the United States between 1909 and 1949.”. . Typically, technical or technological progress isn’t explicitly defined by those invoking Solow, but people take it to mean new gadgets.

Writing in 1956 about the role of productivity growth in the economy unexplained by labor and capital Moses Abramovitz lamented the existence of the unexplained residual factor, of which he said (here in PDF):

If the Solow Residual reflects a "measure of our ignorance" about economic growth, what does it say that it is growing in magnitude?  Is our ignorance getting larger as well?
Posted by Roger Pielke, Jr. at 1/14/2014 12:47:00 PM
Email ThisBlogThis!Share to TwitterShare to FacebookShare to Pinterest
Newer Post Older Post Home