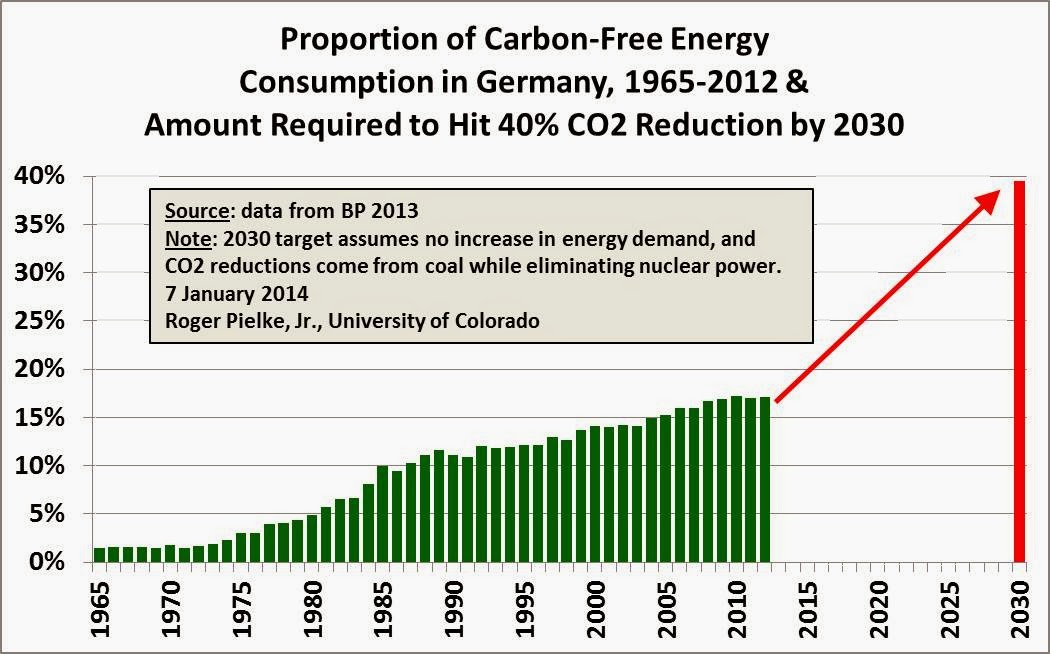 The European Commission has recommended a set of new goals for its climate and energy policies. The centerpiece of the proposed policy is a 40% reduction target for each member nation from 1990 levels. The BBC reports:

Climate commissioner Connie Hedegaard said that, given the economic climate, the 40% target was a significant advance.

"A 40% emissions reduction is the most cost-effective target for the EU and it takes account of our global responsibility," she said.

"If all other regions were equally ambitious about tackling climate change, the world would be in significantly better shape."

Officials emphasised that the 40% target would have to be achieved "through domestic measures alone", meaning that member states couldn't offset their reductions by paying for carbon cutting in other countries.

The graph at the top of this post, which I earlier shared via Twitter and is of the sort that I have shown previously, shows the implications of a 40% emissions target for the proportion of carbon-free energy in Germany in 2030.  The graph assumes that (a) carbon-free energy replaces the most carbon-intensive sources (i.e., coal), (b) that nuclear is phased out and (c) that energy demand remains constant at 2012 levels to 2030. Such assumptions could of course be varied, the data come from BP 2013 Statistical Review of World Energy.

The graph indicates that achieving a non-nuclear, renewables-based energy system in Germany, while also reducing emissions to 40% below 1990 levels, will remain a formidable challenge. For now, Germany is building more coal plants and moving away from that 2030 target.
Posted by Roger Pielke, Jr. at 1/22/2014 07:59:00 AM
Email ThisBlogThis!Share to TwitterShare to FacebookShare to Pinterest
Newer Post Older Post Home