A Different Look at the Income of the 99%

Research by Emmanuel Saez and Thomas Piketty is fundamental to debates over inequality. They have documented that a larger share of US income has been going to the top 10% -- and especially the top 1% -- of all earners. Their data is shown in the graph at the top of this post.

Here is how the New York Times recently characterized their work:


The top 1 percent took more than one-fifth of the income earned by Americans, one of the highest levels on record since 1913, when the government instituted an income tax.

The figures underscore that even after the recession the country remains in a new Gilded Age, with income as concentrated as it was in the years that preceded the Depression of the 1930s, if not more so.

High stock prices, rising home values and surging corporate profits have buoyed the recovery-era incomes of the most affluent Americans, with the incomes of the rest still weighed down by high unemployment and stagnant wages for many blue- and white-collar workers.

I was curious about how their data looked in absolute rather than relative terms -- after all the magnitude of incomes and number of earners both change dramatically over time.  So I have conducted an empirical thought experiment. Let's pretend that the top 1% does not exist. (But in case you are curious, in 2012 the bottom 99% had a collective income of $6.85 trillion, not too shabby. In 2012 the top 1% had a collective income of $2 trillion or the entire income of the 100% in 1956. Wow.)  But for analytical purposes, let us strike them and their income from the data. What then does the income of the bottom 99% look like over time?

The answer can be found in the graph below (using the wonderfully user-friendly dataset made available by Emannuel Saez -- source here in PDF, hereafter SP13. Note I show their data without capital gains, its inclusion does not affect this analysis.): 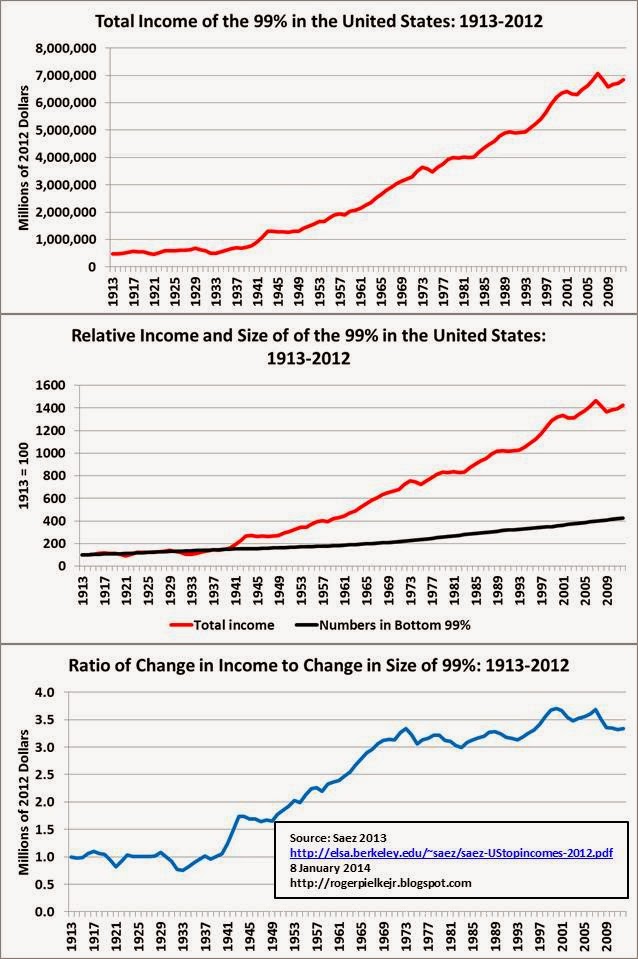 The graph shows that the total income of the 99% grew by about a factor of 14 since 1913 (accounting for inflation), whereas the number of earners among the 99% grew by only a factor of 4. From 1913 until World War II the total wages of the 99% grew at the same rate as the growth in the size of the workforce (using the SP13 definition). From WWII until about 1970 income of the 99% grew a remarkable 3 times the rate of growth in the workforce, after which the ratio remained constant for a decade. Then around 1980, the ratio jumped around, exhibiting a modest increase over the past 30 years, mainly due to a jump in the 1990s. 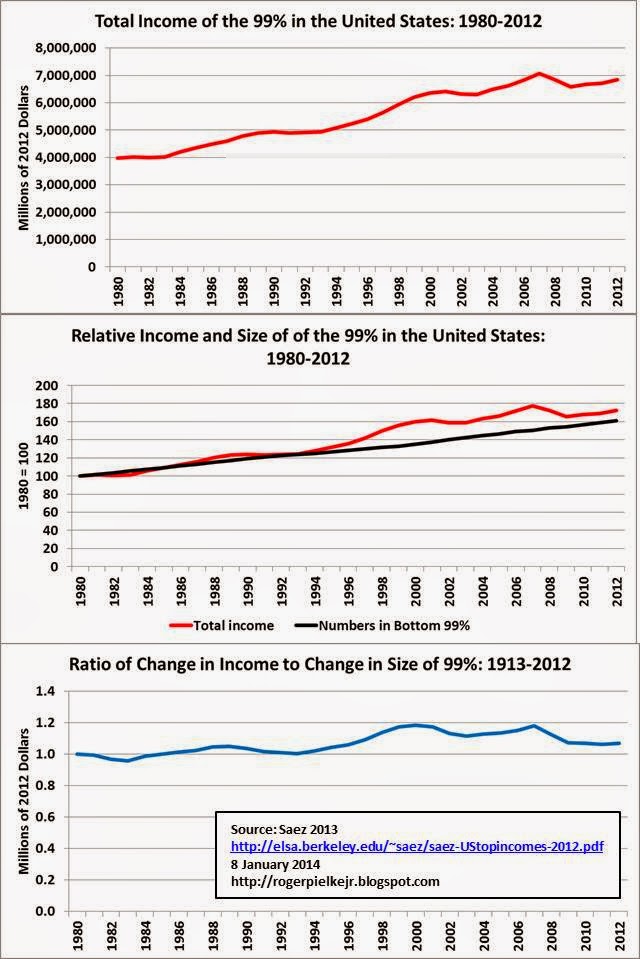 This look at the data suggests that it may be incorrect to claim that greater income equality is causing the 99% to fall behind in an absolute sense. Their income is keeping pace or a bit better with respect to changes in the size of the workforce. At the same time a case can be made that income inequality is keeping the 99% from doing better than they might - although causality is of course at the center of much debate.

Clearly, with respect to total income growth in the US there was something quite different about 1940-1970 than the rest of the period. Was that demographics? Policy? Changing composition of the labor force? Technology? Put another way, was the mid-century growth in wages an anomaly or should it be expected as business-as-usual?