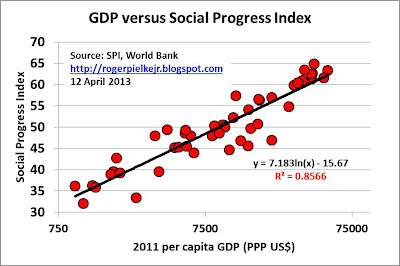 It is becoming increasingly apparent – particularly in light of the world’s global economic downturn – that GDP is simply too one-dimensional to provide a complete measure of a nation’s progress. The ‘Arab Spring’ of 2011 and the last decade in Mexico show that robust economic growth does not automatically translate into wellbeing among the population.

Countries need a new measure – as a complement to, not a replacement for economic growth – that assesses and quantifies factors that really matter to real people: Do I have enough to eat? Do I have shelter? Can I get an education? Do I have a fair chance to get on in life without facing discrimination? Economic measures, whether it is GDP or income inequality, are mere proxies for wellbeing. We need to measure wellbeing directly.

Efforts to replace GDP as a metric of overall well-being have seen many champions. However, almost all of these efforts have added complexity but little, if any, additional value. So it seems to also be the case with the Social Progress Index.

The graph at the top of this post shows the relationship of the new SPI index with national per capita GDP (2011 PPP $US from The World Bank graphed on log scale). As you can see, there is an exceptionally strong relationship between the two metrics. More than 85% of the variance in the SPI can be explained by per capita GDP, suggesting little practical basis for preferring the SPI to a straightforward metric of wealth as a proxy for well-being.

The lesson? You can try to develop an index of well-being that hides wealth. But it is there nonetheless.
Posted by Roger Pielke, Jr. at 4/12/2013 08:02:00 AM
Email ThisBlogThis!Share to TwitterShare to FacebookShare to Pinterest
Newer Post Older Post Home