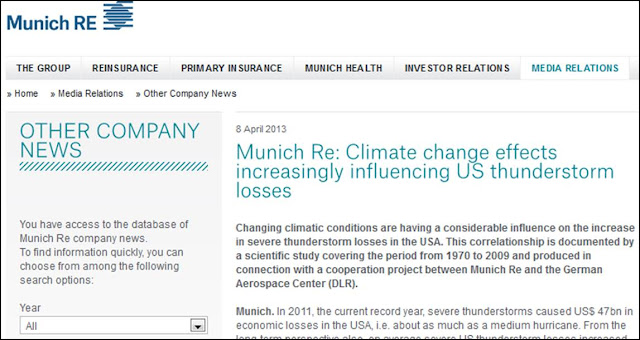 Last October Munich Re, one of the world's largest reinsurance companies, issued a press release in which they made a remarkable claim about a new study of normalized economic losses related to thunderstorms in the United States:


In all likelihood, we have to regard this finding as an initial climate-change footprint in our US loss data from the last four decades.

To date no studies of economic losses associated with weather events have successfully identified a signal of human-caused climate change in loss data. This conclusion was underscored by the IPCC which surveyed the literature and concluded in its 2012 Special Report on Extreme Events that "Long-term trends in economic disaster losses adjusted for wealth and population increases have not been attributed to climate change, but a role for climate change has not been excluded."

The claimed discovery was thus of tremendous significance. But fantastic claims before peer review deserve, as Andy Revkin has warned, caution.

Munich Re did prepare a report (which was not made readily available) in conjunction with its press release, but no peer reviewed paper. They later promised that peer reviewed support for the claim would soon be forthcoming:


[Ernst] Rauch [head of Munich Re's Climate Center] said Munich Re researchers have submitted a paper for peer review that shows how climate change is resulting in intensifying storms in the United States. The forthcoming study, he says, points for one of the first times "toward an attribution of climate change to losses."

This week, the promised study -- Sander et al. 2013, hereafter SEFS13 -- was published in the journal Weather, Climate and Society of the American Meteorological Society. Munich Re subsequently issued the press release that you see at the top of this post titled, "Climate change effects increasingly influencing US thunderstorms."

If you like stories with happy endings, then this would be the time where you should stop reading this post, to take a nod from Peter Falk in The Princess Bride. As one looks a little bit closer at the public representations made by Munich Re about the paper and the paper itself, one quickly finds -- as is all too common in climate science -- that the strong public claims simply cannot be supported by the actual research, and the paper suffers from an obvious fatal error. Let's have a look.

The further one reads into the press release the further it deviates from the claim expressed in its title. The paper says the following about attribution of loss trends:


[A] high probability is assigned to climatic variations primarily driving the changes in normalized losses since 1970. Due to the chosen methodology, the current study has not been able to conclusively attribute the variability in severe thunderstorm forcing situations and losses to either natural climate variability or anthropogenic climate change.

Got that? The paper says nothing conclusive about attribution. It is not an "initial climate change footprint." It does not support the claim that "climate change effects increasingly influencing US thunderstorm losses."

In fact, the paper says much the opposite: attribution of losses to climate change was not achieved in the paper. Perhaps the media is getting wise to these games, because there has been almost no media coverage of the sensational claim trumpeted in the headline of the press release put out a few days ago -- a claim, which if it were correct, would deserve broad coverage.

But it gets worse.

The paper argues that the causal mechanism leading to greater thunderstorm variability is the frequent claim that it is the consequence of an atmosphere holding more water vapor:


Trapp et al. (2007, 2009) have found that climate-model-based projections display indications of a regime in which increasing specific humidity (as the main contributor to increasing CAPEml over time) increases the annual frequency of severe thunderstorm environments (defined by the product of CAPEml and DLS) in a transient climate model experiment since 1950.


As a precondition of rising CAPEml, monthly observations of near surface specific humidity during the period 1973–1999 (HadCRUH, Peterson et al. 2011) show a clear increase in the Northern Hemisphere. In eastern North America this increase equals 3.6 (±2.7) %. This was shown to be in coarse statistical agreement with the results from (anthropogenically forced) GCM runs over this period (Willett et al. 2010).

It is here where the reader of the paper might find themself being taken for a fool.

Willett et al. 2010, the source cited by SEFS13, provides estimates for changes in "near surface specific humidity" for a large number of regions around the world, as shown in the figure below. 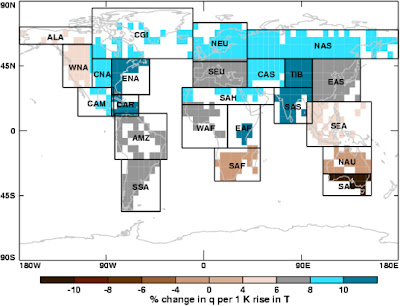 Immediately below is a zoomed-in image of North America taken from the image above. Immediately below that I show Figure 1 from SEFS13 -- which shows the location of the normalized loss events included in its study -- with my overlay of the Willetts et al. 2010 CNA region (which stretches from the Florida panhandle to the Texas panhandle, and then goes north to the Canadian border through eastern Colorado) highlighted as the transparent blue box. 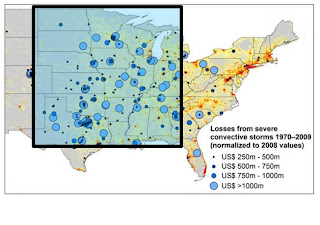 You can clearly see that the vast majority of normalized US thunderstorm losses actually occurs in Central North America -- CNA. This conclusion is insensitive to small errors in the mapping of the CNA region onto SEFS13 Figure 1.

It is not hard to find as it appears in the same table as the ENA data which was reported by SEFS13. In fact, it appears in the row just above. It says that there has been no change in "near surface specific humidity" in Central North America 1973 to 1999. The numbers are 1.9 (±4.1) %. Surprised?

So let's recap:
Misleading public claims. An over-hyped press release. A paper which neglects to include materially relevant and contradictory information central to its core argument. All in all, just a normal day in climate science!
Posted by Roger Pielke, Jr. at 4/10/2013 05:22:00 PM
Email ThisBlogThis!Share to TwitterShare to FacebookShare to Pinterest
Newer Post Older Post Home