Via the New York Times, James Hansen, long time NASA scientist and advocate for action on climate change, announced that he was retiring from the government:

His departure, after a 46-year career at the space agency’s Goddard Institute for Space Studies in Manhattan, will deprive federally sponsored climate research of its best-known public figure.

At the same time, retirement will allow Dr. Hansen to press his cause in court. He plans to take a more active role in lawsuits challenging the federal and state governments over their failure to limit emissions, for instance, as well as in fighting the development in Canada of a particularly dirty form of oil extracted from tar sands.

“As a government employee, you can’t testify against the government,” he said in an interview. 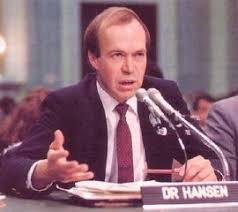 Hansen's scientific contributions while at NASA are notable and will no doubt be reflected upon elsewhere. Here I focus on Hansen's evolution from staid government bureaucrat -- clean shaven in a blue suit to a stylish icon, complete with signature hat and Amish beard -- to passionate advocate who no longer wants to work for government but seeks to change it.

Over the years Hansen has experimented with many approaches to advocacy, including at times some heavy flirtation with varieties of stealth advocacy that ultimately saps the authority of science. But in the end, Hansen seems to have gotten it right. He is first and foremost a democrat, and has decided to participate in the most noble of democratic traditions through public advocacy for what he values.

As I chronicle in The Climate Fix, Hansen first burst upon the public scene in a 1988 Congressional hearing on climate change organized by Senators Al Gore and Tim Wirth. I recount this important episode in the elevation of climate as a political issue:


The hearing that day was carefully stage-managed to present a bit of political theater, as was later explained by Senator Tim Wirth (D-CO), who served alongside Gore in the Senate and, like Gore, was also interested in the topic of global warming. “We called the Weather Bureau and found out what historically was the hottest day of the summer. Well, it was June 6th or June 9th or whatever it was. So we scheduled the hearing that day, and bingo, it was the hottest day on record in Washington, or close to it. What we did is that we went in the night before and opened all the windows, I will admit, right, so that the air conditioning wasn't working inside the room.”

The star witness that day was Dr. James Hansen, a NASA scientist who had been studying climate since the 1960s. Hansen had decided that “it was time to stop waffling so much and say that the evidence is pretty strong that the greenhouse effect is here and is affecting our climate.” Hansen emphasized three points in his testimony: First, that “the earth is warmer in 1988 than at any time in the history of instrumental measurements;” second, “global warming is now large enough that we can ascribe with a high degree of confidence a cause and effect relationship” to the emission of greenhouse gases, primarily carbon dioxide; and third, the consequences are “already large enough to begin to affect the probability of extreme events such as summer heat waves.” The hearing’s public impact surely must have exceeded even its organizers expectations, as the of the temperature in the room and the scorching weather outside resulted in Hansen’s testimony receiving wide coverage in the national and international media.

It was less than a year later in 1989 when Hansen appeared on the front page of the New York Times after going public with complaints that the Office of Management and Budget (under George H. W. Bush) had altered his testimony before Congress. At the time the NYT reported:


Dr. Hansen's testimony, before it was changed, would have given strong support to the position that while there are still many uncertainities, enough is known now about the general and even regional effects of the global warming trend to start acting now to mitigate and prepare for those effects. . .

''I should be allowed to say what is my scientific position; there is no rationale by which O.M.B. should be censoring scientific opinion,'' Dr. Hansen insisted. ''I can understand changing policy, but not science.''

Along the way, Hansen has progressively become more and more overt in his political advocacy reflecting at least a change in tactics if not a change in outlook. Thus, his resignation from NASA was probably inevitable, if belated. 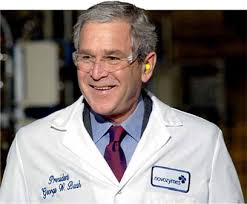 In 2004, following an extended set of skirmishes with the administration of George W. Bush over access to media and responsibilities of government officials ability to comment on government policy, Hansen gave a public lecture in Iowa in advance of the presidential election between Bush and John Kerry.

Hansen explained in his book, Storms of My Grandchildren, how he had hoped that the talk  might be a first domino that helped to influence the election outcome (p. 95):


I did not expect my talk to alter votes in the upcoming election. Yet, in the back of my mind I wondered: What if this public lecture leads to publicity and debate, and Professor [James] Van Allen indicates agreement with my position? Given his reputation, it might influence fence-sitters in Iowa . . .

Iowa is a "purple" state, sometimes voting Republican, sometimes Democratic. It was conceivable that Iowa might be pivotal in the presidential election. I had decided to mention my preference for John Kerry over George W. Bush, based on their positions over climate and energy.

Hansen explains how he sent an advance copy of the speech to the New York Times Andy Revkin who subsequently reported on the speech, highlighting Hansen's conflicts with the Bush Administration and endorsement of Kerry. Despite the national visibility and conveyance of his endorsement, Iowa and the election both went to George W. Bush.

In his book Hansen characterizes himself (and fellow traveler Steve Schneider) in religious movement terms and expresses repeated frustration that his political efforts -- which included the sending of strongly worded letters to world leaders -- had not paid off in the sorts of action that he would have liked to see. Yet, Hansen had become a movement icon and enjoyed remarkable access to leading policy makers, of the sort that is virtually unprecedented among the scientific community.

For instance, in 2007 Hansen wrote letters to UK Prime Minister Gordon Brown and German Chancellor Angela Merkel calling for those countries to take specific actions on climate change. Hansen reflected after the fact that he hoped that his arguments would be found convincing to Merkel on the weight of their merits and against the wishes of her government (p. 179):


Merkel was trained as a physicist, and I hoped that rather than relying on advisers, she would be willing to think about the problem herself. I figured she would be able to appreciate the geophysical boundary conditions, the conclusion that most of the coal must be left in the ground.

Hansen was advised by German scientists close to government that the best route to influence policy was to speak to the environment minister. Remarkably, Hansen was subsequently granted a 90 minute session with the German environment minister, Sigmar Gabriel, arranged by John Schellnhuber (who also served as a Merkel advisor) and Stefan Rahmstorf of the Potsdam Institute for Climate Impact Research.

With Gabriel, Hansen found a receptive audience to his summary of climate science and the need to stabilize carbon dioxide at 350 parts per million. There were no debates over the science. "The sticking point," Hansen recounted, "was the implication: the need to halt coal emissions." Hansen was quickly learning about the realities of democratic systems and the fact that scientific authority does not compel action. Gabriel, of course, is famous for explaining that “You can build 100 coal-fired power plants and don’t have to have higher CO2 emissions,” due to the magic of emissions trading. Germany's coal use has expanded since Hansen's audience with the minister.

Hansen's initial reactions to the failure of world leaders to follow his guidance was, ironically enough, to blame their intransigence on a failure of democracy. Hansen explained to The Guardian in 2009:

The democratic process is supposed to be one person one vote, but it turns out that money is talking louder than the votes. So, I'm not surprised that people are getting frustrated. I think that peaceful demonstration is not out of order, because we're running out of time."

The irony in Hansen's view is of course that the governments that he was deriding over their supposed democratic failures were expressing the preferences of democractically-elected officials rather than one man's pleas (a foreigner, no less) for action grounded in his claims to the authority of science. Hansen even went so far as to call for his political opponents to be put on trial, as the NY Times reports, "He has repeatedly called for trying the most vociferous climate-change deniers for “crimes against humanity."

Perhaps it was the realization that calls for action originating in authority were not going to trump the realities of democratic governance. Perhaps it was something else. But at some point Hansen changed tack.

Since 2009 Hansen has been arrested a half-dozen times for civil disobedience at protests against individual fossil fuel projects, marking a sharp departure from his earlier efforts to sway world leaders based on his authority as a scientist. The NY Times explains:


In the absence of such a broad [climate] policy, Dr. Hansen has been lending his support to fights against individual fossil fuel projects. Students lured him to a coal protest in 2009, and he was arrested for the first time. That fall he was cited again after sleeping overnight in a tent on the Boston Common with students trying to pressure Massachusetts into passing climate legislation.

Such overt advocacy for government action, grounded in shared values is the lifeblood of democracy.

Hansen will of course face criticism for his actions and for the specific policies that he advocates, some of it well deserved. However, one thing that Hansen can no longer be accused of is using science as a cover for seeking political ends. Hansen's lifelong journey to passionate advocate has arrived at a place where he shows respect for both democratic practices and for the role of science in democracy.

Best wishes to Jim Hansen as he takes on new challenges!
Posted by Roger Pielke, Jr. at 4/02/2013 11:00:00 AM
Email ThisBlogThis!Share to TwitterShare to FacebookShare to Pinterest
Newer Post Older Post Home