Value and Quantity Measures of Trends in Manufacturing 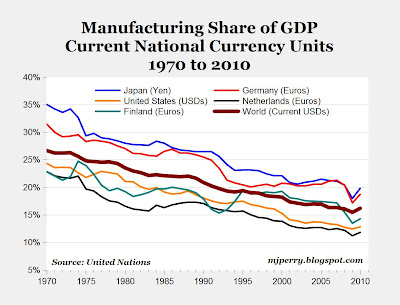 This is a bit of a wonky and technical post on an important debate over how we measure innovation, and in fact, what innovation actually means in the economy. Much of the debate over innovation in manufacturing has focused on the notion of productivity defined as a measure of the ratio of inputs to outputs. This is all well and good, but how should we define inputs and outputs? By their quantity? Their weight? Their color? Or perhaps economic value?  If so, should that value be adjusted for price changes over time?

The Information Technology and Information Foundation and a few others argues for the importance of using quantity as a metrics of manufacturing output, whereas most economics prefer to use economic value. Which measure makes more sense?

At the National Chamber Foundation blog, University of Michigan economist Mark Perry posts up the graph above in response to a recent ITIF report on manufacturing (which I critiqued earlier this week) and says this:


The chart above shows the manufacturing shares of GDP for Japan, Germany, the U.S., the Netherlands, Finland, and the entire world economy from 1970 to 2010, using current national currency units for the countries and current U.S. dollars for the world. For all five countries and for the world economy, the manufacturing shares of GDP fell to historic all-time lows in 2009, before increasing slightly in all cases in 2010. . .

Rob Atkinson, lead author of the ITIF report, shows up in the comments of Perry's post with some strong assertions which focus on the data used to assess the role of manufacturing in the economy:


Mark, i wonder if you did read our report cover to cover. Because if you did i wonder how you can say that its a post-industrial store. The report states very clearly that BEA data show that CONSTANT dollar share of manufacturing of economy is UNCHANGED over the last 30 years and therefore this talk about post-industrial society is simply not true).

Moreover, the data you present on declining manufacturing share of GDP in nominal dollars. This is misleading to say the least... You have to use constant dollar share. on that note, when measured properly the US performance is worse than many nations and suggests a competitiveness problem.

I would argue that when looking at ratio of one macroeconomic variable to another over time, it is more accurate to use nominal dollars than real dollars. If you compare nominal manufacturing to nominal GDP, you get a pure number that reflects reality, and is not distorted by the changing value of the dollar over time and a changing price deflator.

I first calculated spending on energy as a share of personal consumption using real dollars and showed a declining trend in that series. After some comments questioning that methodology, I re-calculated using nominal dollars and the trend reversed.

So I would argue that we should compare manufacturing to GDP using nominal dollars to get a more accurate measure of the two variables versus each other. To compare two variables, both measured in dollars (or euros) that occur in the same year, there is no reason to adjust for inflation, and in fact the inflation adjustment will distort the comparison.

The debate between these two is over whether it is appropriate to focus on the value of goods produced or the quantity of goods. The ITIF report makes the case that one has to factor out changes in prices in order to identify changes in quantity (from p. 26):

Because measured manufacturing productivity has grown faster than overall productivity, manufacturing output in nominal terms might be expected to decline. An item that cost $500 to produce in 1980 might cost $400 to produce in 2010, but during the same period inflation in the total economy grew by 165 percent.100 Using nominal output figures would suggest that the output of this item has declined, but it is possible only its price declined. In this way, using nominal dollars overstates the decline of manufacturing.

Like many technical issues this one gets wrapped up in arcane debates over numbers and methodology and risks losing sight of the big picture.

Let's cut through all that and present this argument in simple terms. Atkinson is arguing that the quantity of goods produced in the United States has declined. Metaphorically, he is claiming that the manufacturing sector in the US today fills fewer shipping containers than it used to. For his part, Perry is focused on value, not quantity and is arguing that the absolute value of the contents in the metaphorical shipping contains has increased over time while at the same time that value has relatively decreased a a proportion of overall economic activity.

Who is correct? Well, they both could be correct. The important of different metrics depends on the question being asked and the problem being alleged. It is not at all obvious to me that the ITIF argument that manufacturing quantity has declined -- and using their metrics -- is in any way problematic or indicative of failures in US competitiveness that might be addressed via policy. As I argued earlier this week, the ITIF assertion that a decline in quantity output in manufacturing is in any meaningful way comparable to analogous to the Great Depression just doesn't hold up in broader economic context.

There may indeed be worthwhile practical steps that can be taken to help US industry compete in the global marketplace, but that evidence cannot be discerned via looking at data on either production or value. ITIF's strategy of arguing that there is a single correct way to measure productivity and innovation is probably not constructive, as the more fundamental questions involve why we are measuring such concepts in the first place. I look forward to ITIF engaging these more fundamental questions.
Posted by Roger Pielke, Jr. at 3/23/2012 10:38:00 AM
Email ThisBlogThis!Share to TwitterShare to FacebookShare to Pinterest
Newer Post Older Post Home