The Richer Rich in the United States 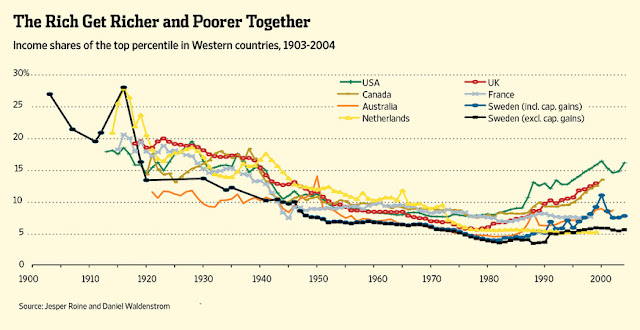 The figure above comes from a column by Allan H. Metzler in today's WSJ. He argues:


Regardless of one's economic philosophy, the public deserves an accurate presentation of the reasons for the change in income distribution. The change is occurring in all the developed countries. The chart shows that policies that redistribute wealth and income have at most a modest effect on income shares.

While he is correct that gross trends are similar across countries, he underplays the rather remarkable acceleration of income share captured by the top 1% of earners in the United States, which has continued since the end of the data period shown in the graph. Is that acceleration a function of policy decisions? Of course. On that point Metzler is letting his economic philosophy speak rather than looking closely at what the graph actually suggests.
Posted by Roger Pielke, Jr. at 3/09/2012 11:46:00 AM
Email ThisBlogThis!Share to TwitterShare to FacebookShare to Pinterest
Newer Post Older Post Home