Worse than the Great Depression?! 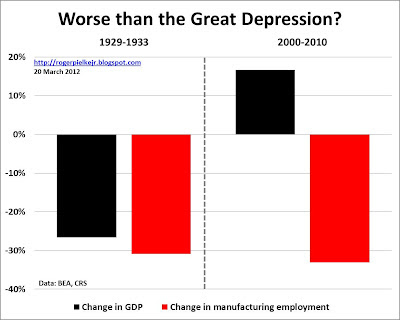 The Information Technology and Information Foundation, a DC-based think tank which routinely punches above its weight in policy debates over innovation, has a new report out today titled "Worse Than the Great Depression: What the Experts Are Missing About American Manufacturing Decline." The report has a lot of interesting data and arguments, which are worth unpacking in some detail.

However, in this post I simply want to address the overarching argument of the report that the experience of the past decade in the manufacturing sector has been -- as the title says -- worse than the Great Depression. This statement of the magnitude of the problem is thus the basis for arguing that policy actions are needed to protect manufacturing as a special sector in the economy. However, this overarching argument is hyperbole. It underscores the fact that ITIF has come to find itself on the wrong side of the innovation and manufacturing debate.

The figure at the top of this post helps to explain why the past decade is not particularly comparable to the Great Depression. The graph shows that while losses in manufacturing jobs were quite similar from 1929-1933 and 2000-2010, during the Depression the economy (inflation adjusted) contracted by 27% but during the latter period expanded by 18%!

One reason for this big difference is the much smaller role than manufacturing plays in today's modern economy. Almost by definition, manufacturing matters less to GDP and jobs than it once did. At the onset of the Great Depression, manufacturing was responsible for about 1 in every 3 non-farm jobs. Today, that number is more like 1 in 13.

A 2009 Congressional Research Service report (here in PDF and cited by ITIF) makes the case in more detail that the past decade is not comparable to the Great Depression:


There are substantial differences in the extent of unemployment during the Great Depression and the current recession. The unemployment rate rose almost eight-fold between 1929 (3.2%) and 1933 (24.9%). In contrast, it almost doubled between December 2007 (4.9%) and May 2009 (9.4%). At the peak of unemployment during the Great Depression (1933), one in four workers was unemployed, in contrast with fewer than one in eleven today. To approximate the pervasiveness of unemployment at the depth of the Depression, the number of workers without jobs would have to have totaled 38.6 million in May 2009, which is 24 million more workers than were unemployed this May (14.5 million).

Employers cut the total number of jobs on their payrolls much more deeply during the Great Depression than they have thus far in the latest recession. Between 1929 and 1933, employment on nonfarm payrolls fell by 24.3%, compared to 4.3% thus far in the recession. To approximate the relative extent of cutbacks that took place over the four-year period between 1929 and 1933, employers would have had to have shed 27.6 million more workers than they did between December 2007 and May 2009. In the goods-producing sector, 7.2 million rather than 3.0 million workers would have to have been laid off since the recession began to equal the relative impact of the four-year (1929-1933) decline. Within the goods-producing sector, construction companies would have had to have pared payrolls by 2.2 million more jobs than the 1.2 million positions cut through May 2009. Manufacturers would have had to have let go 2.5 million workers beyond the 1.8 million they displaced since December 2007 if the industry was in as relatively bad shape as it was in 1933.

The loss of manufacturing jobs over the past decade is not worse than the Great Depression, and that is a good thing, for the economy and for the future of American workers.
Posted by Roger Pielke, Jr. at 3/20/2012 07:07:00 PM
Email ThisBlogThis!Share to TwitterShare to FacebookShare to Pinterest
Newer Post Older Post Home