Gasoline, Energy and the Economy 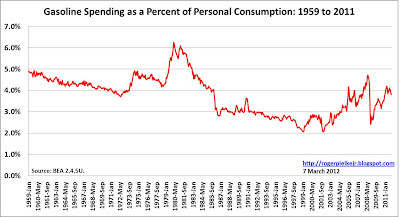 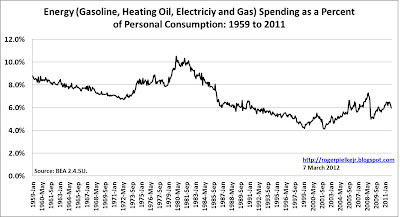 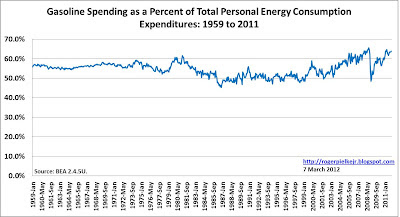 So what does all of this data mean? Here is my interpretation:

1. The US economy is not yet in a danger zone with respect to gasoline prices -- $4 dollar per gallon gasoline is not what it used to be. What would it take for gasoline to exceed 5%, 6% or more of personal consumption expenditures? It is not easy to answer with any confidence, but if the increase in price of $1.50 per gallon or 70% from May, 2009 to September, 2011 resulted in an increase in personal gasoline consumption expenditures of 1%, then assuming linearity (caution: rarely a good assumption, but lets play around), then we'd have to see gasoline prices of more than $5 per gallon to reach that 5% threshold. There are good reasons to think that such an outcome is not imminent.

2. The overall impact of gasoline prices is somewhat muted in the context of total energy expenditures because of the falling price of natural gas. To the extent that natural gas can replace gasoline (not easy in the short term) this trend will be accelerated. Meantime, consumers will see a bit of an offsetting balance in their total energy expenditures due to lower electricity and gas prices. A hot summer could easily lead to increased expenditures as air conditioning is cranked up, and summer is traditionally when there is more demand for gasoline.

3. Why did things appear to change in US gasoline spending starting 2002? My guess is China, which joined the WTO in 2002 and subsequently saw its oil consumption increase by almost 90% from 2002 to 2010, a period of remarkable economic growth. Over the same time period the United States saw its oil consumption decline by more than 3% (Data: BP). Such trends are likely to continue, making it more important for the US to reduce the gasoline intensity of its economy and/or develop new resources. The pressure to drip and pipe will only increase.

4. In the context of such trends, it should be a matter of policy to seek to reduce the share of economic activity expended on gasoline in particular and energy in general. The good news is that there does seem to be a consensus, even in these most partisan of times, on what makes for a common sense energy policy -- The Economist makes a good start.

Here is President Obama just yesterday responding to a Fox News reporter who asked if he really -- deep down inside -- wants to see gasoline prices go higher. The President responds with his verison of the iron law: