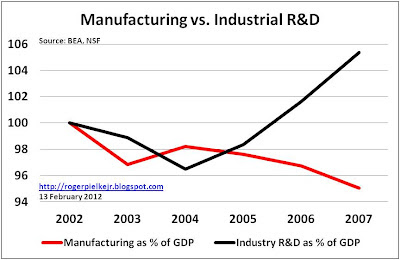 With industrial R&D increasing faster than GDP over the past decade, even as manufacturing fell sharply as a proportion of GDP, I find little support for the argument that support of manufacturing is in some way critical for supporting industrial R&D.
Posted by Roger Pielke, Jr. at 2/13/2012 11:01:00 AM
Email ThisBlogThis!Share to TwitterShare to FacebookShare to Pinterest
Newer Post Older Post Home