Gasoline Intensity of The Economy 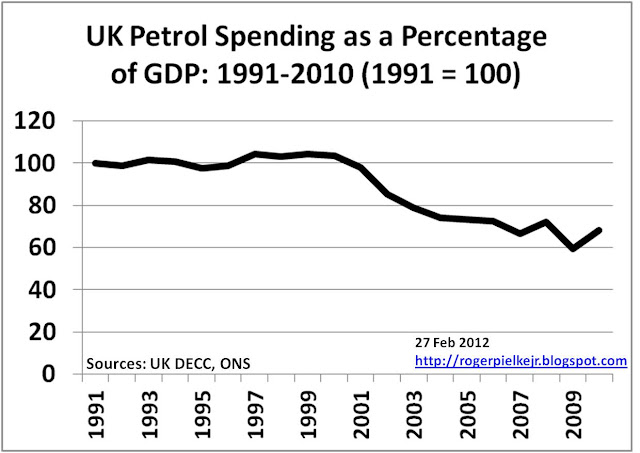 Following up yesterday's post on US gasoline prices, here is a comparison figure for UK petrol spending as a proportion of GDP over the period 1991-2010 (the period for which data is available) with petrol data from the UK government's DECC and GDP data from ONS (conversion factors courtesy BP).

A few points to note:
So the bottom line for the US in comparison to the UK is mixed -- The US spends about half as much of GDP on gasoline than does the UK.  At the same time, over the past decade US gasoline intensity has increased by about 30% while UK gasoline intensity is about the same as it was 10 years ago.

It has been frequently pointed out on this blog that gasoline in the UK and Europe is as much as twice the cost of that in the US. No doubt pricing helps to explain the improvement in gasoline intensity in the UK from about 2000 to 2009, and the recent reversal is explained by a combination of economic stagnation (if not contraction) in the UK coupled with increasing oil prices. It is important to observe that increasing oil prices have proportionately less impact in the UK because the relative change in prices will be smaller, as they start with a much larger base. My guess -- and it is only a guess -- is that economic recovery in the UK is likely to be accompanied by a resumption of improvement in the gasoline intensity metric.

The performance of the US with respect to gasoline intensity since 1983 suggests that after about 15 years of improvement, the US has been moving in the wrong direction. This provides some evidence that gasoline prices are not too high, but too low -- by exactly how much we can certainly debate. Those who'd like to argue the other side should address the following (a) whether you accept that decreasing gasoline intensity of economic activity is a desired outcome, and if yes, then (b) if pricing is not an appropriate tool to influence this outcome, what you would recommend instead.
Posted by Roger Pielke, Jr. at 2/28/2012 10:31:00 AM
Email ThisBlogThis!Share to TwitterShare to FacebookShare to Pinterest
Newer Post Older Post Home