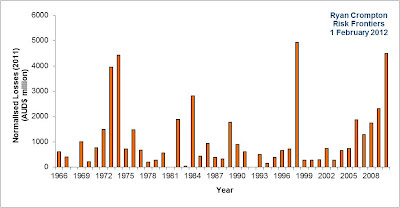 Ryan Crompton of Risk Frontiers at Macquarie University has provided an update of their normalized loss catalog which is shown in the graph above. Crompton sends along this description of the update:


The normalised loss figure shown above is an updated version of that published in Crompton and McAneney (2008). The methodology used to normalise losses has been refined and the loss data from seasons 2006/07 - 2010/11 has been included and normalised to season 2011/12 values. The Insurance Council of Australia (ICA) insured loss data is current as at 31/1/12.

In our previous normalisation of the Disaster List ending at the 2005/06 season (Crompton and McAneney, 2008) we noted the low loss activity in the most recent 5 seasons analysed. Since that time there has been heightened weather-related loss activity with the most recent 5 seasons to 2010/11 averaging slightly more than double the 45-year average. The average annual weather-related insured loss over the most recent 10 seasons (2001/02 – 2010/11) is within approximately 30% of the average annual loss over the full 45-year period of the Disaster List.